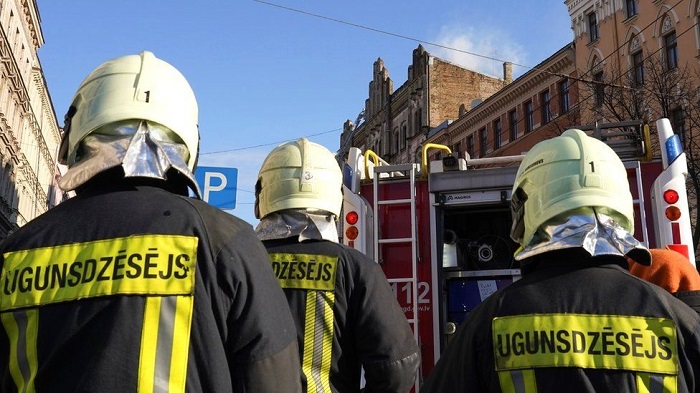 Eight people have been killed and several others seriously hurt in a fire at an illegal hostel in the Latvian capital Riga, officials say.

Firefighters were called to an apartment on the top floor of a six-storey building in the city's Merkela Street in the early hours of Wednesday.

At least 24 people were evacuated from the burning building, some suffering from burns and smoke inhalation.

Most of the victims are believed to be foreign tourists, Riga's mayor said.

Mayor Martins Stakis said the apartment, located near the main railway station, was within a state building and did not have permission from the authorities to be used as a hostel.

He told reporters that police were asking for help to identify the victims and that "specialists have been employed to help with the language barrier". He added that alternative accommodation was being provided to anyone affected.

Latvia's deputy police chief, Andrejs Grishins, said that in addition to the eight fatalities, "nine were injured during the lethal fire in the hostel".

The State Fire and Rescue Service (SFRS) said firefighters were called to the address at 04:43 local time (01:43 GMT) on Wednesday to find the building's top floor and roof on fire - an area, it said, of about 250 sq m.

The SFRS said the area was cleared and roads were closed while rescue operations were under way, but that efforts were hindered because the apartment door was reinforced and required a key code to open.

It said the fire was brought under control shortly after 08:00 and was eventually extinguished at 12:10.

Earlier this year, the SFRS asked the owner of the property on Merkela Street to provide information that fire safety regulations were being met, Latvia's national public broadcaster lsm.lv reported. It said that no information was provided and that fire inspectors were refused access to the building.

Mr Stakis tweeted on Wednesday that police had received "information about drug use [and] non-compliance with Covid regulations" at the location, which had previously been reported for inspection by residents.

A criminal investigation is under way.