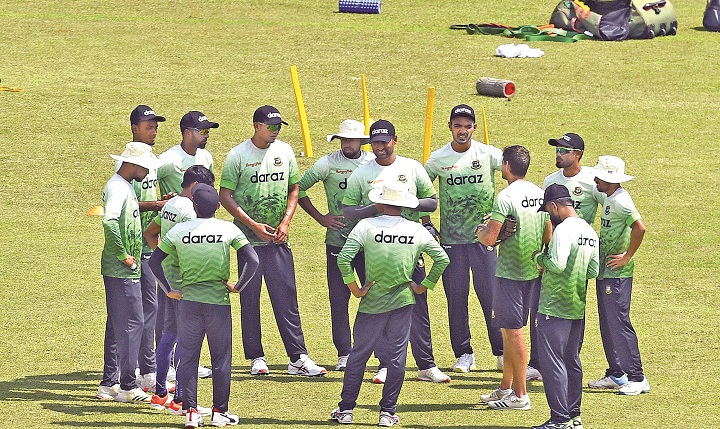 Players and coaching staff of Bangladesh national team are seen during a practice session in Kandy on Wednesday. – AFP photo

Bangladesh needs to have a mental shift to earn success in the Test as they have to play to win and not merely to be happy with a draw, Bangladesh head coach Russell Domingo said on Wednesday.

Bangladesh is placed at the bottom of the points table in the ICC World Test Championship and their clinching maiden Test series win over Sri Lanka in their own den is expected to be a confidence booster for the visitors.

The Tigers will take on Sri Lanka in the two-match Test series decider at Pallekele International Cricket Stadium today that had earlier produced a high-scoring draw in the opening Test.

“It is disappointing when a drawn Test is seen as a massive success. I am not here for drawn Tests. We don’t want to lose Tests but we should have a mental shift. We have to play to win, and not merely be happy with draws,” Domingo told reporters.

“I have had six or seven Tests with the team now and I think I understand our team and culture. I know the areas we need to improve on, particularly on the mental side of things in Tests. There’s a long way to go.

“There’s a fear of losing Tests and that’s something that we have to come away from. We have to play to win. At the moment I feel we are playing not to lose. It is a mental shift that we need to make.

“That mental shift will take a bit of time. Guys haven’t been successful in Tests. Until we change that mindset, we will always be okay with mediocrity. It is not something I want to be part of.

“We want to take the team forward and play the game to win. We have to bat first in tough conditions. We have to declare to give ourselves enough time to bowl sides out. Those are the shifts that you have to make to become a serious Test-playing nation,” he added.

It was learnt that Domingo was disappointed how things turned out on the second day of the Test match as the South African insisted that Bangladesh should have declared at the tea of the second day after reaching over 500 runs.

Domingo felt it would have given enough time to his bowlers but the game hardly ended the way he planned as the tourists were extra cautious in their approach despite batting at a relatively easy wicket.

Domingo said that they should follow the same route in the second game adding that they need to play five bowlers as he feels that gives them the best chance in the longer format though he insisted the decision does not depend on him entirely.

“I need to chat with the selectors this afternoon but I think that’s the way forward. When you have Shakib (Al Hasan) in the team, it allows you to play seven batters. When you don’t have that all-rounder, we have to be brave and try to have five bowlers who can get us 20 wickets.

“If it was solely up to me, it would be the way to go, but there’s a panel of selectors that need to be consulted with, and it got to be a decision that we all have to support,” he said.

Domingo, who earned only one win and one draw in eight Test matches during his tenure so far, added that he is keen to win the series in Sri Lanka as winning Test series abroad is one of their primary goals.

“We want to try to win the series. It will be a great achievement for Bangladesh to win a series in Sri Lanka. Winning a Test series abroad is a goal that we have set ourselves. We have to play well over the five days. Sri Lanka is a tough side to beat especially at home. Our focus is on starting the Test well and one session at a time,” he concluded.