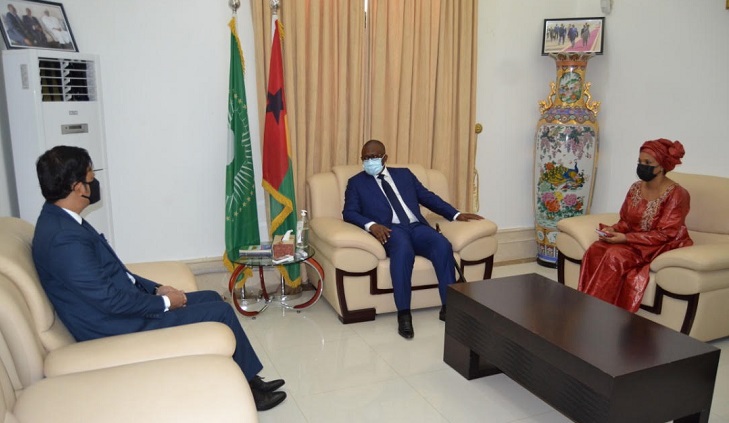 The Ambassador was escorted in a motorcade from his hotel accommodation in Bissau to the Palace of the Republic. On his arrival at the Palace, the Ambassador received a gun salute from the Presidential Guards, while national flags of both the countries were flying.

The Ambassador then ceremonially presented his letter of credence to the President of Guinea Bissau on Tuesday (April 27).  In an audience with President Embaló, Ambassador Tarik Ahsan conveyed the greetings of Bangladesh President Md. Abdul Hamid and Prime Minister Sheikh Hasina to him, said the Bangladesh Embassy in Lisbon.

The Ambassador stated that he was privileged to be the first Bangladesh Ambassador to present credentials to the Head of State of Guinea Bissau.

The Ambassador mentioned with pride that Bangladesh and Guinea Bissau have similar historical backgrounds of achieving independence through glorious wars of liberation and that flags of both countries were raised at the United Nations Secretariat in New York on the same day on September 18, 1974.

While there had not been much bilateral contact between the two countries in the past, the Ambassador expressed the hope that, with this formal acceptance of an Envoy, relation would now be progressively enhanced to a higher level.

The Ambassador suggested that Guinea Bissau consider accrediting, at least, a non-resident Ambassador to Bangladesh for maintaining a regular contact in both ways.

Terming the trade between two countries as not up to its potentials, the Ambassador suggested that Guinea Bissau can import quality goods at affordable price from Bangladesh, such as, RMG, pharmaceuticals, ceramics, electronics, ICT products, bicycles/motor cycles and even ships.

Citing Bangladesh’s success in grass roots level development, the Ambassador viewed that, in a spirit of South-South cooperation, Bangladesh and Guinea Bissau can cooperate and exchange best practices, particularly in rural development and agriculture.

He attached importance to working together at multilateral fora on the common issue of climate change. The Ambassador requested for continued support of Guinea Bissau, at UN and OIC platforms, in the efforts for ensuring repatriation of the forcibly displaced Rohingyas from Bangladesh to Myanmar.

President warmly welcomed the Ambassador Tarik Ahsan to Guinea Bissau and congratulated him on being the first Bangladesh Ambassador to present credentials in his country.

The President extended warm greetings to Bangladesh President Md. Abdul Hamid, Prime Minister Sheikh Hasina and the people of Bangladesh. The President expressed his belief that bonds of friendship between Bangladesh and Guinea Bissau would be further strengthened in the days to come.

He expressed keen interest in the expanding cooperation with Bangladesh, particularly in the proposed areas of trade and capacity building, and suggested that the two Foreign Ministries remain in contact for promoting the cooperation.