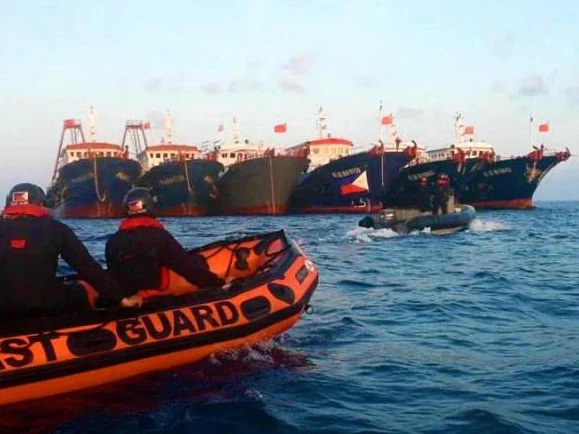 China just won another battle in its conquest of the South China Sea – without even firing a shot.

“Subjugating the enemy’s army without fighting is the true pinnacle of excellence,” the ancient strategist Sun Tzu declared in his famous book, Art of War. It seems to be working well for Beijing.

Philippines President Duterte appears to be the latest victim.

Duterte this week addressed for the first time the crisis of hundreds of Chinese militia vessels swarming around Whitsun Reef and the Spratly Islands, elbowing Philippine boats out of their traditional fishing grounds.

After more than a month of international uproar, Duterte finally made his position clear.

He doesn’t want any trouble.

“I’m not so much interested now in fishing,” he declared in a recorded public address. “I don’t think there’s enough fish to quarrel about.”

He wants to remain on friendly terms with Beijing.

But, eager to reassure a tense home audience, Duterte added a proviso: “If they start drilling oil there … I will send my grey ships there to stake a claim.”

Since taking office in 2016, the controversial president has rebuffed his nation’s traditional ties with Washington and sought to build a new alliance with Beijing. His promise of billions of dollars in cheap Chinese loans and “Belt and Road” investment funds have yet to bear fruit.

Now public patience is running out. But the damage already done may be irreversible.

‘It will be bloody’

Duterte believes he is powerless to respond to Beijing’s territory grab.

“If we go there to assert our jurisdiction, it will be bloody,” he said in his address.

It echoes previous comments where he insisted Manila was powerless to defend its territory, and warned attempting to do so would spark a one-sided war.

“Occupation of the West Philippine Sea (South China Sea) was completed by the singular act of China not retreating,” he said. “That’s the rule in international law. When you are the first to leave, it means that is not yours already.”

Duterte said Beijing had not honoured an international court of arbitration ruling.

Nor did he expect it to comply with any United Nations mandate. “Do you think China will just give it freely because of the United Nations’ demand?” he asked.

But Duterte attempted to preserve Philippine rights to any oil or valuable minerals under the Spratly Islands, if not its fish.

Beijing, however, is not likely to be any more generous in recognising Manila’s International Law of the Sea jurisdiction to oil than it has with seafood.

“The South China Sea islands and reefs that you talked about are Chinese territory,” Vice Foreign Minister Le Yucheng told media this week.

“We’ve done some construction work on our own islands and reefs in order to improve the conditions there, for better navigation safety and convenience for the ships passing by. I don’t see that as a problem.”

Vietnam also lays clam to the Paracel and Spratly Islands, as well as the exclusive economic zone (EEZ) awarded to it under United Nations Law of the Sea (UNCLOS) guidelines.

All reject China’s assertion that historic precedent grants it total sovereignty over the South China Sea as defined by its 1940s era ‘nine-dash line’ map.

The United Nations international court of arbitration supported a Philippines appeal against China’s claim in 2016.

This unenforceable ruling has since been ignored and condemned by Beijing, went on to complete a chain of artificial island fortresses inside that territory.

For its part, the Chinese Communist party insists regional territorial tensions are entirely the fault of the United States and its allies.

“The US obviously views the spat between the Philippines and China over some Chinese fishing boats sheltering around Niu’e (Whitsun) Reef in the South China Sea last month as an opportunity to flex its muscles in the South China Sea again, and hopes to use it as a stepping stone to advance its own strategic interests in the region,” the propaganda outlet Global Times declares.

“Yet the US troublemaking is doomed to failure as China and the Southeast Asian countries remain adamant in their efforts to prevent the South China Sea from becoming a crucible for conflict.”

But such unity, as Duterte’s words concede, is dependent on every aggrieved nation surrendering to Beijing’s arbitrary demands.

Which may be why China this year authorised its Coast Guard to open fire within its “jurisdictional seas”.

That term is not recognised under the International Law of the Sea. But it is used by Beijing when referring to everything within the nine-dash line.

“The nations of the world must unite to strongly push back China, otherwise if China succeeds in taking the South China Sea, or in making the South China Sea its own national lake … then UNCLOS will collapse for other naval powers will also seize their new seas as their own possessions,” retired senior justice Antonio Carpio warns.

Duterte may be content to let Beijing take control of his EEZ. But outspoken senators, former judges – and parts of the military – are not.

“Is he a coward or a traitor?” declared Senator Risa Hontiveros. “Either way, he has failed our country.

“He has failed to defend our sovereignty, our seas, our people. He may be ready to surrender the Philippines, the Filipino people will never give up the country’s sovereignty.”

She was not the only member of government to use such strong language.

He was referring to a 2016 campaign promise where Duterte boasted he would jetski to the Spratly Islands and plant a flag to reinforce Philippine sovereignty.

It’s a sentiment being echoed elsewhere in the halls of power.

“We respectfully urge the President to reject this Chinese narrative of war, because it is intended to scare countries to submit to China’s will of illegally occupying the South China Sea,” former foreign affairs secretary Albert del Rosario said.

“In the past few days, we managed to pressure China to disperse its vessels in Julian Felipe (Whitsun) Reef, not through war or bloodshed, but through the courageous assertion of our rights by our officials and soldiers.”

Philippine Ambassador to the US Jose Manuel Romualdez attempted to reassure upset Filipino fishers that they had international sympathy.

“The United States is obviously waiting for us to call them if we need their assistance in removing or asking the vessels that are parked in our area of responsibility or economic zone,” he said.

The Chinese Communist Party insists the 2016 United Nations tribunal ruling in favour of the Philippines is “illegal, null and void”. Which is why Manila should “immediately stop wanton hype-up,” a Foreign Ministry spokesman warned this week.

It’s part of Beijing’s “wolf warrior diplomacy” – where insisting something is true is considered enough to make it true.

That’s where the “grey zones” of international law, and the international community’s willingness to act, are actively exploited.

It’s a tactic designed to divide and conquer – both at international and domestic levels.

Philippine Senator Panfilo Lacson warned the perception Manila had surrendered to Beijing’s demands could be disastrous.

“I am not saying the President is actually raising the white flag but that’s the implication. If the officers and men of the AFP (Armed Forces of the Philippines) would take it that way, it could be disastrous to Philippine sovereignty,” he added.

“So let’s work along that line. We should not feel we’re alone … Why would we sulk in a corner? There are stronger countries, even Europe. They are willing to assist us.”

Duterte was indignant at suggestions he may lose support among the Philippines influential military.

“Any time Defence Secretary General Delfin Lorenzana says that I am no longer needed, you can ask all of them and I said that I’m going home,” he said.

“If I cannot have the co-operation of the Armed Forces, then there’s no point in working for this government”.

Jamie Seidel is a freelance writer