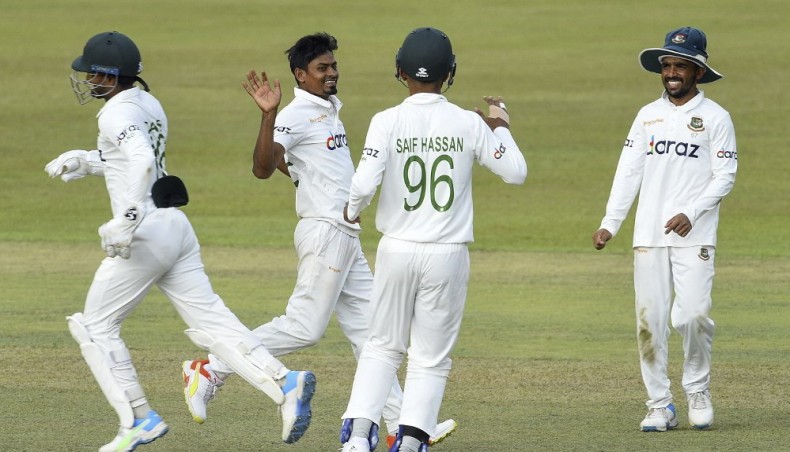 Bangladesh oozed with confidence to end the win-draught in longer version format as they take on Sri Lanka in the second and final Test of the series tomorrow (Thursday) at the Pallekele International Cricket Stadium.

The confidence stemmed from their performance in the first Test at the same venue, in which they forced Sri Lanka to draw the match. Considering their recent performance, which saw them lost two Tests at the hands of a severely depleted by the West Indies side at home, it was a win-like draw.

What would please Bangladesh more that their vulnerable batting line up came all guns blazing in this match with Nazmul Hossain Shanto making his first century to a bigger one, as he hammered 163. Alongside him, Captain Mominul Haque, hit his first ton in an overseas country. But it was opener Tamim Iqbal, whose whirlwind batting in both innings dismantled Lankan bowlers and paved the way for the other batsmen to hurl the baton.

At the same time, when batsmen played to their potential, the bowlers bowled tirelessly in the unforgiving condition.

Specially pacer Taskin Ahmed, playing only his sixth Test, bowled 30 overs in scorching heat to the surprise of many.

Taskin ended up with 3-112, which earned plaudits from his Captain and the cricket experts.

Both Bangladesh Captain Mominul Haque and team leader Khaled Mahmud Sujon believes if Bangladesh players put up the same performance in the second Test, they will stand on a good chance to win.

“It’s a good thing to draw a Test in overseas conditions after losing two Test matches at home. I think we played as a unit in the first Test and when we played as a unit, we normally did well. If we keep up the consistency and intensity in the second match, I think we stand a good chance,” Bangladesh Test Captain said.

Bangladesh had nothing to be proud of in the longer version format in which they time and again proved them extremely vulnerable. Since their elevation to this format, they so far played 122 Tests, won just 14 and lost a a staggering number of 91 Tests of which 43 defeats was by innings margin. The rest of the 17 Tests, including the last Tests were drawn.

But if the last five matches between the two sides are taken into consideration, angladesh though won one, they had two credible draws alongside losing two matches. The match they won came in Lankan soil and that too in their 100th Test in 2017. Apart from West Indies and Zimbabwe, Bangladesh’s only victory outside of the country came in Lankan Island.

While they beat a depleted West Indies and Zimbabwe outside of the country, the Lankan side was full strength side, so the magnitude of the victory was huge. And emboldened by the draw in the first match, Bangladesh now hopes to replicate that performance of 2017 once again.

“I believe we can hold on to our consistency with the bat and do well in the next match and then the tour of Zimbabwe.

We’ve to have the mentality to become a proper Test side,” Bangladesh team leader Khaled Mahmud Sujon said.

“If our boys can build themselves up and if we can compete this way in Tests, going for almost a year and drawing matches, playing better cricket and the batsmen can take responsibility at the top of the order, then there will be a time when we’ll learn to win Test matches, winning matches continuously. A consistency is very necessary for us now,” he continued.