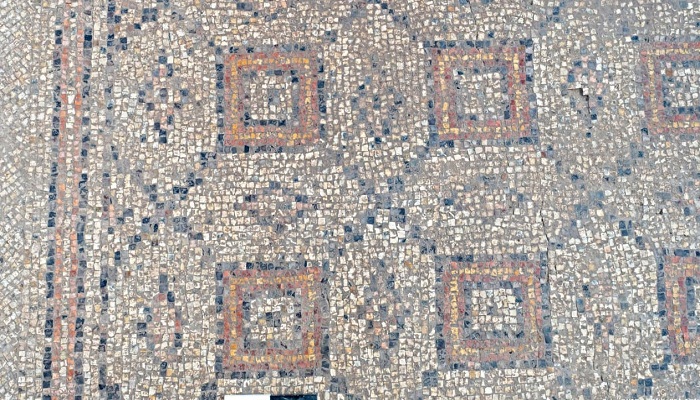 Awell-preserved 1,600-year-old mosaic has been unearthed by archaeologists working in the Israeli city of Yavne.

The mosaic, which dates from the Byzantine period (300-400 AD), was found as archaeologists unearthed an extensive industrial zone which operated for several centuries, according to a government press release from the Israel Antiquities Authority (IAA), published Monday.

"The pavement may have been part of a splendid residential building in a wealthy neighborhood adjacent to the industrial zone," according to the statement.

The pavement is multicolored and covered in geometric motifs set in a black rectangular frame, added the IAA.

"It's the first time in Yavne that they found a colored mosaic floor," IAA archaeologist Elie Haddad told CNN, adding that several coins were found in the sealed space underneath it.

The archaeologists initially thought the mosaic was white thanks to a patina -- a gloss or sheen that develops on a surface due to age -- that had coated it for years, but they cleaned it off using a special acid.

"To our astonishment, a colorful mosaic carpet was revealed, ornamented with geometric motifs," reads the IAA statement.

Haddad told CNN that it is unusual to find such a mosaic in an industrial area, and it may be a clue that further excavations will reveal the remains of residential buildings.

The mosaic was documented in the field and then treated and preserved by conservation experts at the Rockefeller Museum in Jerusalem. It will soon be put on display in a square in Yavne, adds the statement.

The mosaic was found as part of a large excavation project which will take a couple of years to finish, said Haddad.

The team has already found the remains of ancient wine presses and a wine warehouse, and Haddad hopes that the excavations could yield further artifacts to fill Yavne's first archaeological museum.

"Archaeological preservation and awareness of the past are important values in the life of the city of Yavne, which has a magnificent history," said Zvi Gur-Ari, mayor of Yavne, in the statement.

"In an age of progress and accelerated development in all fields of life, future generations should also be able to see how the city has evolved throughout history."

In March, dozens of fragments of a Dead Sea Scroll bearing biblical text were found by archaeologists working in the Judean Desert, according to the Israeli government.

The fragments were the first pieces of the Dead Sea Scrolls found in around 60 years and were recovered from a cave where Jewish rebels against the Roman Empire hid around 1,900 years ago, according to a government press release.