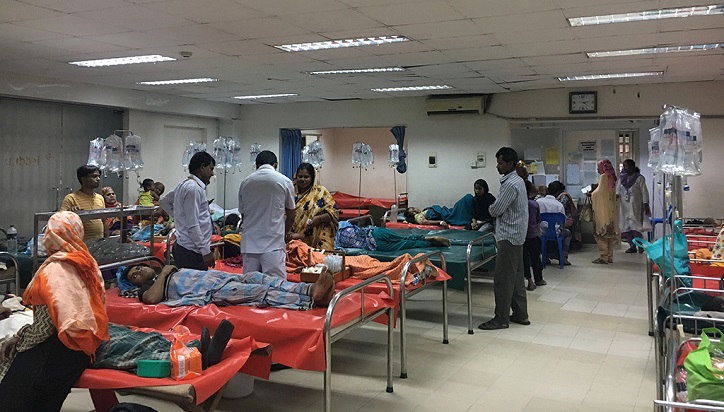 The number of diarrhoea patients has increased in different parts of the country, especially in Barishal division, in the last few weeks.

Health experts said use of contaminated water in household works, drinking unsafe water amid hot weather, eating food items contaminated with harmful bacterium and lack of maintaining proper hygiene are behind the rise in diarrhoea cases.

About 4,90,877 patients have been affected by diarrhoea in eight divisions across the country from January to March, according to a report by Health Emergency Operations Centre and Control Room at the Directorate General of Health Services (DGHS).

Hospital sources said the number of diarrhoea patients has increased in different parts of the country, especially in Barishal division, for the last few weeks amid sweltering summer heat while a number of people with diarrhoeal disease are being admitted to hospitals every day.

He said a team of Institute of Epidemiology, Disease Control and Research (IEDCR) is visiting the area to identify the cause of rise in diarrhoea patients.

The DGHS official said on average, 1,500 diarrhoea patients were admitted to different hospitals in Barishal division every day a week back. “Now the number of patients has declined to around 1,000 everyday in the region,” he added.

About the rise in diarrhoea patients, Bashudev Kumar said though people of the region drink tube well water, they use unsafe water from pond or river for household works which transmits the disease.

He further said they are carrying out campaign in various ways to make people aware of the danger of using unsafe water and diarrhoea for the last few days and ensuring proper treatment of the patients.

However, the icddr,b sources said the number of patients may increase after the end of countrywide restriction on public movement imposed by the government since April 4.

Intake of contaminated water and unhygienic food is the major reason for the outbreak of the waterborne disease, the health experts said.

Dhaka Shishu Hospital sources said many children affected by diarrhoea are taking treatment at Out Patient Department of the hospital every day.

Azharul Islam of icddr,b advised people to drink safe water and maintain hygiene in a bid to remain safe from diarrhoea and asked people to consult doctors immediately in case of emergency.

The country is experiencing searing temperatures for the last couple of days, making public life miserable.

The current heat spell may continue throughout the month and temperature may roam around 40 degree Celsius, Bangladesh Meteorological Department (BMD) sources said.

On Sunday, country's highest temperature 41.2 degrees Celsius was recorded in Jashore which was highest in seven years.

According to the DGHS, 16,67,845 people were affected by diarrhoea across the country, including in Dhaka, last year while 13 of them died.