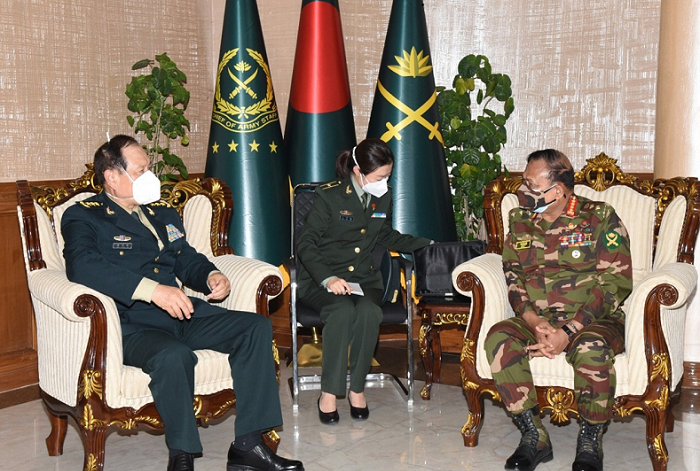 During the visit, the Chinese Defense Minister led a 20-member delegation. During the meeting, they exchanged greetings and discussed various issues related to maintaining good relations between the armed forces of the two countries and mutual cooperation in the future.

During the bilateral talks, Bangladesh Army Chief expressed his commitment to improve bilateral relations, exchange of military training, regular exchanges at the Armed Forces level and thanked China for its cooperation in tackling the Covid-19 epidemic.

During the talks, the Chief of Army Staff, in the light of Bangladesh’s foreign policy, referred to ‘friendship towards all, and enmity towards none’ and said Bangladesh was always committed to maintaining friendly relations with all.

On the occasion of the golden jubilee of Bangladesh’s independence, the Chinese Defense Minister paid deep tributes to Father of the Nation Bangabandhu Sheikh Mujibur Rahman on his birth centenary.

He lauded the economic development and progress of Bangladesh achieved under the visionary leadership of Prime Minister Sheikh Hasina.

Expressing satisfaction over the depth and breadth of good relations between Bangladesh and China, the Chinese Defense Minister expressed his firm determination to take this relationship to a higher level in the future.

He also stressed on the importance of enhancing Bangladesh-China cooperation in defense cooperation, joint training activities and enhancing defense capabilities.

Bangladesh offered to share China’s experience and assistance with the Bangladesh Armed Forces in controlling the ongoing Covid-19 epidemic.

Respecting the aspirations of Bangladesh for resolving the Rohingya issue, the Chinese Defense Minister said that necessary cooperation would be continued in this regard.

He stressed the need to start the return process as soon as possible through mutual talks and assured China’s cooperation in this regard.

Mentionable that the Chinese Armed Forces delegation led by General Wei Fenghe paid homage to the memory of the heroic martyrs of the independence war of Bangladesh by laying a wreath at Shikha Anirban in Dhaka Cantonment before meeting the Chief of Army Staff.

The meeting was attended by Quartermaster General (QMG), Chief of General Staff (CGS), Principal Staff Officer (PSO) of the Armed Forces Division, Master General of Ordnance (MGO) and other generals.

At the end of the visit, the delegation left Bangladesh on April 27.