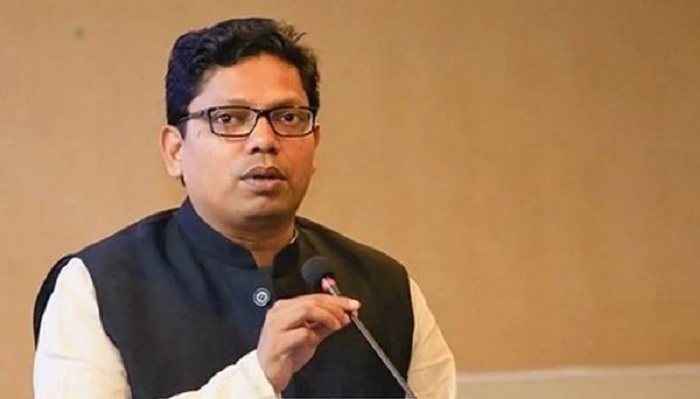 State Minister for Information and Communication Technology (ICT) Division Zunaid Ahmed Palak today urged the journalists to project the achievements of the ‘Digital Bangladesh’ vision before the countrymen and the global arena.

“It’s my expectation that you (journalists) would highlight success stories of advancing the vision ‘Digital Bangladesh’, which is the greatest achievement in the last 12 years, before the country’s 17 crore people and the international community to take it (vision) ahead further,” he said.

Palak made the call while addressing the inaugural session of a virtual workshop titled “Role of Local Journalists in Implementing Digital Bangladesh” as the chief guest.

The architect of ‘Digital Bangladesh’ and Prime Minister’s ICT Affairs Adviser Sajeeb Ahmed Wazed envisaged the vision, Palak said, adding, “Following his (Sajeeb Ahmed’s) directives, we all – ICT Division, a2i project and other stakeholders – are working to materialise the concept.”

Noting that Prime Minister Sheikh Hasina had come with a different type of philosophy by giving a bottom-up approach in 2009 for implementing the ‘Digital Bangladesh’, he said, in 2021 she established that her vision was not just a slogan rather it has been appeared as a philosophy of revolution before the international community.

Union Digital Centers (UDCs) are the successful outcome of Prime Minister’s bottom-up approach of digitization, the state minister said and recalled the inaugural function of the UDC project at remote Char Kukri Mukri island in Bhola on November 11, 2010.

Prime Minister Sheikh Hasina had inaugurated the UDC project through videoconferencing aiming at reaching the computer and internet based digital services to doorsteps of the rural people, he said.

Now in 2021 more than 14,000 people are working in 7001 UDCs across the country while 50 percent of the total officials in UDCs are female, which is the manifestation of the premier’s revolutionary decision of eliminating disparity between men and women, rich and poor, town and village and finally technological discriminations, Palak added.

“Besides, we’ve been working relentlessly to materialise the vision ‘Digital Bangladesh’ involving ministries, private entrepreneurs, innovators, teachers, students, researchers for the last 12 years with a view to building a discrimination-free ‘Sonar Bangla’ as dreamt by Father of the Nation Bangabandhu Sheikh Mujibur Rahman,” he said.

The successful execution of the vision has helped the country to carry forward all activities, including academic activities, uninterruptedly amid the global pandemic coronavirus, the state minister said.

Highlighting the four pillars of the ‘Digital Bangladesh’–human resource development, ICT infrastructure, including reaching internet services to people at low cost, e-governance and ICT industry –, Palak said more than 15 lakh employments have been created in the country’s ICT sector over the last 12 years.

Pointing out that the country’s current earnings from ICT sector reached US$1 billion, the state minister said the government is working with a target of fetching $5 billion from the sector by 2025.

Palak put emphasis on giving IT training to local journalists so that they can earn more from outsourcing apart from their existing profession.

BSS Managing Director Abul Kalam Azad, in his concluding remarks, said when Prime Minister Sheikh Hasina unveiled the concept of ‘Digital Bangladesh’ after taking office in 2009, many people joked with it.

“But now the concept is reality, not a matter of mockery,” he added.

Azad urged the journalists to keep a vigil on the movement and activities of anti-liberation forces so that in the name of delivering religious sermons, they cannot hinder the government’s strides of making Bangladesh a developed country.

a2i Project Director Dr Abdul Mannan in his address highlighted the a2i’s innovations and its services in implementing the vision ‘Digital Bangladesh’.

Though it was a prime challenge of bringing the rural people under the digital services for materializing the vision ‘Digital Bangladesh, now more than 290 digital services are being delivered by the union digital centers across the country, he said.

BSS City Editor and Member of the Board of Directors Madhusudan Mondal and a2i Communication Officer Mamunur Rahman and National Consultant of Communication and Media Outreach ABM Adnan Faisal joined the inaugural session, among others.

A total of 17 BSS correspondents from Rajshahi and Rangpur divisions took part in the workshop.