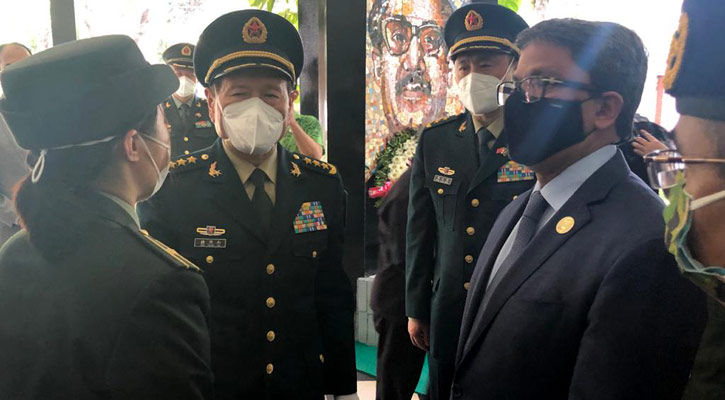 He also signed visitors' book kept at the memorial.

The Chinese Defense Minister Wei Fenghe arrived in Dhaka on Tuesday morning on a brief visit.

State Minister M Shahriar Alam received the Chinese Defense Minister at Bangabandhu Air Base upon his arrival at 10:45 am.

Chinese Ambassador to Bangladesh Li Jiming was also present at the moment.

He will meet President Abdul Hamid at Bangabhaban at 3 pm today.

The Chinese State Councilor will also have a meeting with Chief of Bangladesh Army Staff General Aziz Ahmed, who visited China in November 2019.

General Fenghe was appointed as the head of China's Ministry of National Defense at the 13th National People's Congress on March 19, 2018.

The visit is taking place when Bangladesh and China are in discussion over Covid-19 vaccine cooperation.

China’s Minister of Defense Fenghe is likely to go to Colombo, Sri Lanka from Dhaka on Tuesday before heading towards Beijing.