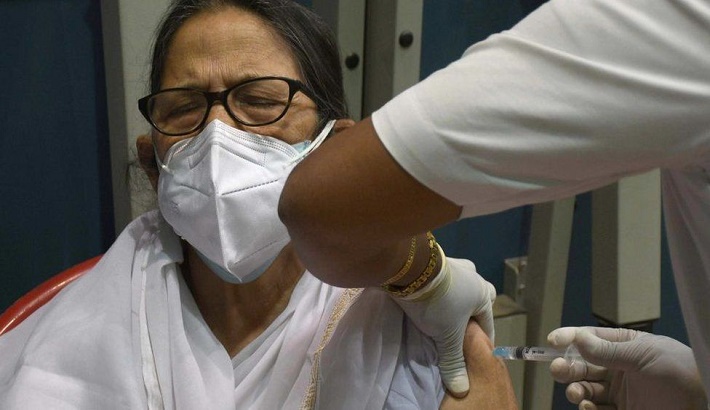 The US has decided to make available crucial raw materials needed for vaccine production in India, which is battling rapidly surging coronavirus cases.

Less than 10% of India's population has so far received an initial vaccination, and Indian manufacturers have complained of shortages of vital raw ingredients as they struggle to meet demand.

What help is the US offering India?

A statement by the US administration said it had identified "specific raw materials" needed for the manufacture of Covishield vaccines in India (made under licence from AstraZeneca).

These will be made "immediately available."

Earlier this year, President Biden invoked the US Defense Production Act (DPA), which meant US vaccine makers would get priority access to specialised equipment, such as pumps and filtration units.

India's biggest vaccine maker, the Serum Institute of India, which produces Covishield, complained of shortages of specialised materials from the US, and its chief executive, Adar Poonawalla, appealed to President Joe Biden to end the restrictions.

The firm said it had faced difficulties importing cell culture media, single-use tubing and specialised chemicals from the US.

However, Mr Poonawalla appeared to suggest recently on an Indian TV channel that they'd now managed the issues with Covishield production, but were facing problems with materials for another vaccine, Covovax.

"Even when [global] demand is very high, new suppliers can't spring up as quickly as they would in some other industries, or at least those new suppliers would not be trusted."

The US has also said it will fund a "substantial expansion" of manufacturing for another Indian firm, Biological E, which is making the Johnson & Johnson vaccine.

The US says it will help the company ramp up production to at least one billion doses by the end of 2022.

What is India doing to increase production?

The two main vaccine manufacturers, The Serum Institute of India (SII) and Bharat Biotech (which makes Covaxin), have been promised $400m and $210m each from the Indian government.

The Indian authorities also halted large exports of Covishield in March, although some smaller donations to other countries were allowed to go ahead, as well as some of the supplies promised to the global Covax vaccine-sharing scheme.

India has also allowed the import of foreign-made vaccines such as Pfizer, Moderna and Johnson & Johnson, although as yet, none of these vaccine makers has applied for an emergency use licence in India as yet.

India will produce 850 million doses of the vaccine annually with five pharmaceutical companies manufacturing it, according to the Russian Direct Investment Fund, which financed the research and development of Sputnik V.

These will be for both the Indian market and for export, although production has not yet started.

The Serum Institute of India (SII) has been struggling for some time to ramp up production to meet domestic and global demand.

The company said in January it was turning out between 60 and 70 million vaccine doses a month - this includes Covishield and the US-developed Novavax (not yet licensed for use in India).

But plans to ramp up production to 100 million doses a month by March were pushed back to June.

Last year, the SII agreed to supply an initial 200 million doses to Covax - the WHO-backed vaccine sharing programme to ensure availability to low and middle income countries - 100 million each of the AstraZeneca and Novavax vaccines.

The global vaccine alliance Gavi, a partner in Covax, is reported to have said that the SII is legally obliged to provide vaccines for the scheme.

The company confirmed recently that it had been sent a legal notice by the UK-based AstraZeneca pharmaceutical company concerning its obligations to supply vaccines - although it did not go into details.

And in India itself, a number of states now have vaccine shortages, which according to some reports, include areas worst affected by the recent sharp upsurge in Covid cases.