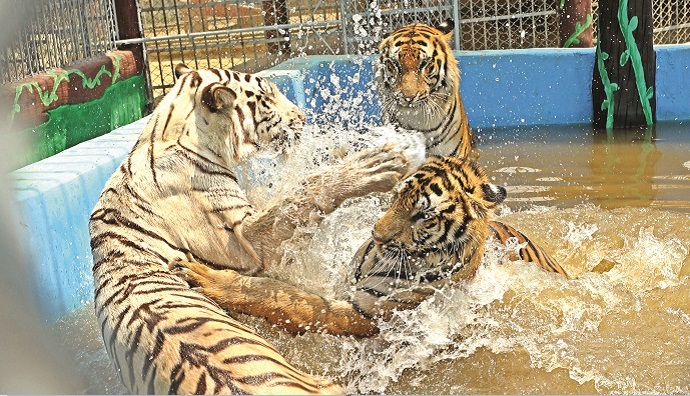 With the country experiencing searing temperatures for the last couple of days, tigers are playing in their enclosure pool in a bid to get relief from scorching heat. The photo was taken from Chattogram Zoo on Monday.--Rabin Chowdhury

The country is experiencing searing temperatures for the last couple of days, making public life miserable.

Amid the stifling summertime temperatures, city dwellers opted to stay indoors during daytime. They have also been suggested avoiding sunbeams and using proper protection like sunglasses, umbrella and cap while going outside amid the heat of the day.

A severe heat wave is sweeping across the regions of Rajshahi, Jashore, Kushtia and Khulna. Besides, a mild to moderate heat wave is sweeping through Dhaka, Mymensingh, Chattogram, Rangpur, Sylhet and Barishal divisions and remaining parts of Rajshahi and Khulna divisions and it may continue, said Bangladesh Meteorological Department (BMD) on Monday.

Country’s highest temperature 39.8 degree Celsius was recorded in Jashore on Monday while the mercury hit 39.4 degree Celsius in Dhaka, said Abdul Hamid, a meteorologist at the BMD.

The current heat spell may continue throughout the month and temperature may roam around 40 degree Celsius, he said.

The searing heat of the subtropical climate, which started this month, has been affecting the vast swathes of the country, resulting in heat-related sickness and forcing people to get admitted to hospitals.

Weather may remain dry with temporary partly cloudy sky over the country, it said.

On Sunday, country's highest temperature 41.2 degrees Celsius was recorded in Jashore which was highest in seven years.

The country witnessed highest temperature of 42 degrees Celsius in Chuadanga in 2014.

Dhaka experienced the hottest day in eight years with the highest temperature recorded at 39.5 degrees Celsius on the day.

In the last two decades, the highest temperature in Bangladesh was 42.2 degrees Celsius in Jashore.