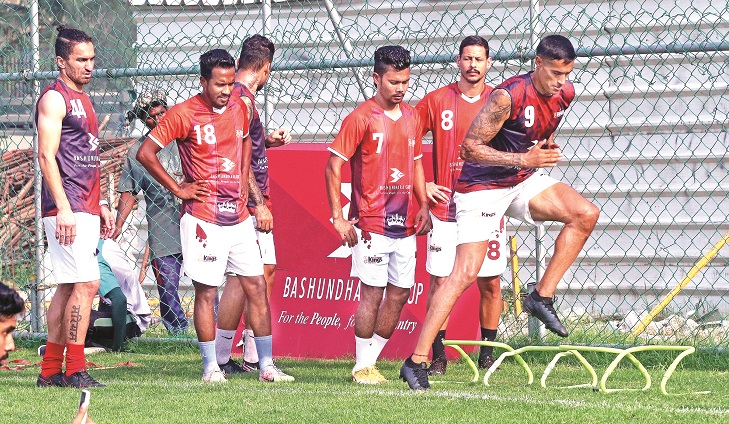 Players of Bashundhara Kings are seen during a training session at the Bashundhara Sports Complex at N-Block in Bashundhara Residential Area on Sunday.

The country’s top outfit are getting prepared in all possible ways for winning both titles.

Kings resumed their camp at its premises last month after the first phase of BPL. Despite having a short-term lockdown break, King's booters continued hard working and successfully achieved the best level of performance.

Kings head coach Oscar Bruzon was able to confidently say that they are not only ready both mentally and physically, but eager to resume the competitions.

“We have been running our camp from last August till (Sunday) today with no interruptions (except the recent lockdown and the FIFA windows),” Bruzon said The Daily Sun after the day’s practice on Sunday.

“We have been using this recent non-competition time to prepare for the demanding month of May as we have key games like BPL and AFC Cup. The first consequence of no having interruptions at our team camp and practices for the entire season is that our players get better and better. It is fact our boys work daily under a positive improving tendency broadening and challenging their limits and horizons,” he said.

Kings captain Tapu Barman is eyeing his team’s performances in the upcoming BPL and AFC Cup.

“I think three BPL matches ahead of the AFC Cup will help us to give extra advantages. We have not been playing for more than one month, so the local matches will benefit us before playing abroad,” Topu said.

“The good thing is we have been doing our practices without any interruptions. I think it will keep us ahead of many teams. We want to clinch both BPL and AFC Cup titles,” the national defender added.

Kings will pass a busy schedule in May as they will play three matches of the BPL second phase ahead of the AFC Cup 2021. In AFC Cup, Kings will play against Dhivehi Premier League (Maldives) champions Maziya Sports and Recreation Club on May 14, the winners of play-offs in South Asia on May 17 and the Indian Super League team ATK Mohun Bagan on May 20, all at National football Stadium in the Maldives.

Kings and Uttar Baridhara Club will lock horns in the first match of the second leg at the Shaheed Ahsan Ullah Master Stadium in Tongi on April 30 at 03:45pm.

Mohammedan SC will face Arambagh Krira Sangha at the Shaheed Dhirendranath Datta Stadium in Cumilla in the day’s other match.

Kings, who remained undefeated in the first leg, are on top in the points table with 34 points from 12 matches with 11 wins and one draw and they are eight points ahead of second-placed Sheikh Jamal DC.