Boris Johnson said bodies 'could pile high' instead of lockdown 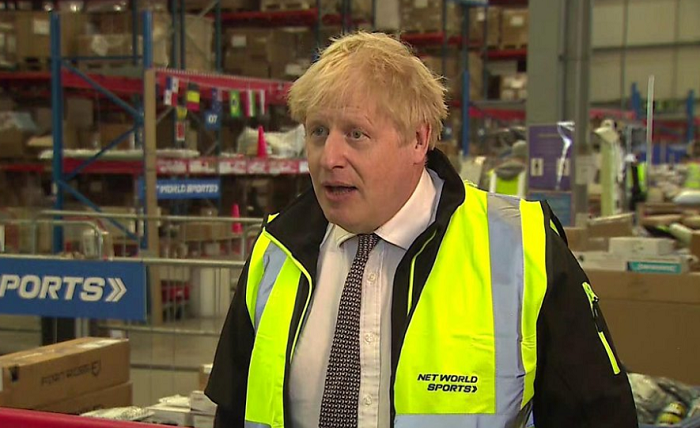 Boris Johnson suggested that "bodies could pile high" during a heated discussion in No 10 in the autumn about lockdown, sources familiar with the conversation have told the BBC.

On Monday, the Daily Mail reported that Mr Johnson had said "let the bodies pile high in their thousands" rather than order a third lockdown.

The PM denied making the remarks, adding that lockdowns had worked.

Labour leader Sir Keir Starmer said he was "astonished" by the reports.

He added that: "Everybody would be deeply concerned, not least all those families who have lost someone in the pandemic."

The government is also facing questions over possible donations made to re-decorate the prime minister's flat, and an investigation into leaked information about England's second lockdown.

The "pile high" comments are said to have been made at the end of October when the government announced there would be a second lockdown in England following a sharp rise in coronavirus cases.

BBC political editor Laura Kuenssberg says, at the time, the prime minister was reported to have had big concerns about the implications of another lockdown on the economy and non-Covid related health issues.

"This does take us back to that moment and back to the very serious claims made by some people who were involved in the decision making - including some ministers - that the hesitancy around the second lockdown did cost lives," she said.

The story was labelled "not true" by Defence Secretary Ben Wallace and when asked about the comments earlier on Monday, Mr Johnson denied having made them.

He added that the public wanted the government "to make sure that the lockdowns work, and they have," he said.

The PM's spokesman also said the reported comments were false adding: "This is untrue and the PM has denied it… I'm not aware of anyone else making that statement."

Lockdown leak
This comes amid a bitter row between Downing Street and the prime minister's former senior adviser Dominic Cummings.

Last week, Mr Cummings published a blog in which he:

Mr Case is giving evidence at an MPs' committee and has said the inquiry into the second lockdown leak is ongoing, however he added that "given the time that has now passed, I think it's probable the team will not successfully identify the source or sources".

A Cabinet Office source told the BBC that no-one had yet been exonerated in the investigation.

Asked if he would launch an inquiry into the leak of the prime minister's lockdown comments, Mr Case said he would have to discuss that with Mr Johnson.

Flat refurbishment
Responding to questions over the funding of his flat refurbishment, Mr Johnson said: "If there's anything to be said about that, any declaration to be made, that will of course be made in due course."

The prime minister receives an annual public grant of £30,000 to spend on the flat - however, there have been reports that work on his flat could have cost as much as £200,000.

Over the weekend, ministers had said the prime minister "personally paid the bill" for the flat but did not answer questions on whether a Tory party donor initially provided the money to him.

This raises questions over transparency as political parties are supposed to report any donations or loans if they are above £7,500, while MPs have to declare any donations - within 28 days - which could influence their actions.

The government is also supposed to publish a list of ministers' financial interests twice a year, but the last one was released in July 2020.

Speaking to the BBC, Mr Wallace said this would be published soon.

Meanwhile Labour has called on the Electoral Commission, which regulates political donations in the UK, to launch a formal investigation.

The watchdog has said it is talking to the Conservative Party about whether the spending on the flat falls within its remit.

Speaking in Wrexham, Mr Johnson said the public were more interested in what the government was doing to move the country "cautiously but irreversibly through the steps of the road map to unlock and to get our country going".

He said the disease was "under control" and that deaths and hospitalisations were low but added "that doesn't mean that we've got it totally licked."

"We've got to be realistic about that; unfortunately, there probably will be another wave of the disease."