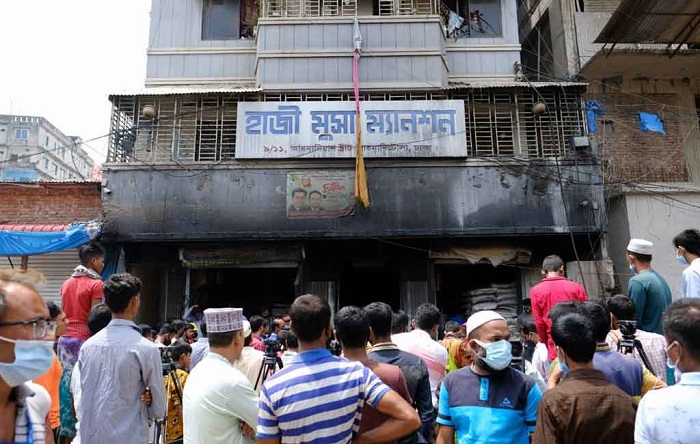 In Old Dhaka, known for its food, centuries-old buildings and narrow alleys, people are living with “bombs” in the form of hundreds of chemical warehouses that pepper this historic neighbourhood.

Fires at such godowns, which lack safety measures, have killed scores over the years. Eleven years after Prime Minister Sheikh Hasina ordered the relocation of the warehouses following the death of about 100 people in Nimtoli fire, they are yet to be shifted largely because of vehement opposition by traders.

Another 78 lives were lost in the infamous Chawkbazar fire but the tragic deaths did not bring about any change.

After the latest fire incident that started at a chemical storehouse on April 23 at Armanitola killing four people, the government is now saying that these godowns will be relocated permanently to Munshiganj within 2022.

Industries Secretary KM Ali Azam told journalists that preparing a 308-acre plot for relocation is going on in Munshiganj. About 2,000 warehouses can be set up there.

For now, 53 warehouses will be shifted to Tongi temporarily – seven of them have already been relocated. Another 54 will be moved to Shyampur – 19 have already been shifted and the rest will be relocated within three months, the secretary said.

Asked about such storehouses in Dhaka, he said available information put the number at around 2,000. “We can relocate them permanently to Munshiganj within 2022,” Secretary Azam said.

A committee, headed by the Cabinet, secretary supervises the relocation of chemical warehouses and all aspects of this trade, he said. The committee has representatives from Rajuk, Industries Ministry, Home Ministry and other related ministries.

This committee also oversees licences for the traders.

The one in Tongi is expected to be completed within this year. “Once they’re ready, all the chemical warehouses will be moved out of Old Dhaka,” he said.

He, however, did not give a timeframe for completion of the projects. “We’re optimistic about relocating them very soon,” he said.

Aminullah said the unplanned warehouses of Old Dhaka are a long-time issue.

“It can’t be resolved without the cooperation of local traders and residents. Moving the warehouses took time because of the local traders’ opposition,” he said, adding that the government is continuing its efforts and is optimistic that godowns will be relocated soon.

Bangladesh Institute of Planners (BIP) General Secretary Dr Adil Mohammad Khan said: “The people in Old Dhaka are living on a bomb. The warehouses were not moved even 11 years after the Nimtoli tragedy.”

He said such incidents will recur if the government does not take strong steps to protect the people’s lives and properties.

“The chemicals stored in Old Dhaka and other areas pose a constant threat of deadly explosions. Necessary steps should be taken after finding out the reasons why the warehouses were not relocated even after the Nimtoli and Churihatta incidents,” he said adding that exemplary punishment should be meted out.

Adil lauded the city corporations for not issuing trade licences for chemical warehouses after the Nimtoli and Churihatta incidents. “The authorities concerned haven’t been able to successfully monitor the chemical warehouse and factories,” he said.

BIP said that most of the chemical factories and warehouses in Old Dhaka were not constructed following building code and standard. “People are residing in the same building housing warehouses, a dangerous practice that has been going on for years,” he said.

These warehouses were constructed out of greed, violating the rules. “Their existence has put a big question mark on our pledges to build a modern and livable city,” he said.

Backtracking from an earlier decision to relocate chemical warehouses to multi-storey buildings in Keraniganj BSCIC Industrial Estate facing opposition from traders was delaying the relocation. The government decided to shift warehouses by building a plot-based industrial estate.

Many house owners in Old Dhaka are illegally renting out their buildings to be used as chemical factories and warehouses to earn extra bucks. They themselves are living in other areas, leaving their tenants in danger.

“This practice will continue until the house owners are brought under the law. Traders of illegal chemical factories and warehouses should be brought to book,” he said. “And, actions should be taken against the government officials concerned if they’ve neglected their work (in this regard).”