USCIRF's move to have India listed as CPC coordinated by Islamist infiltrators in US body, says report 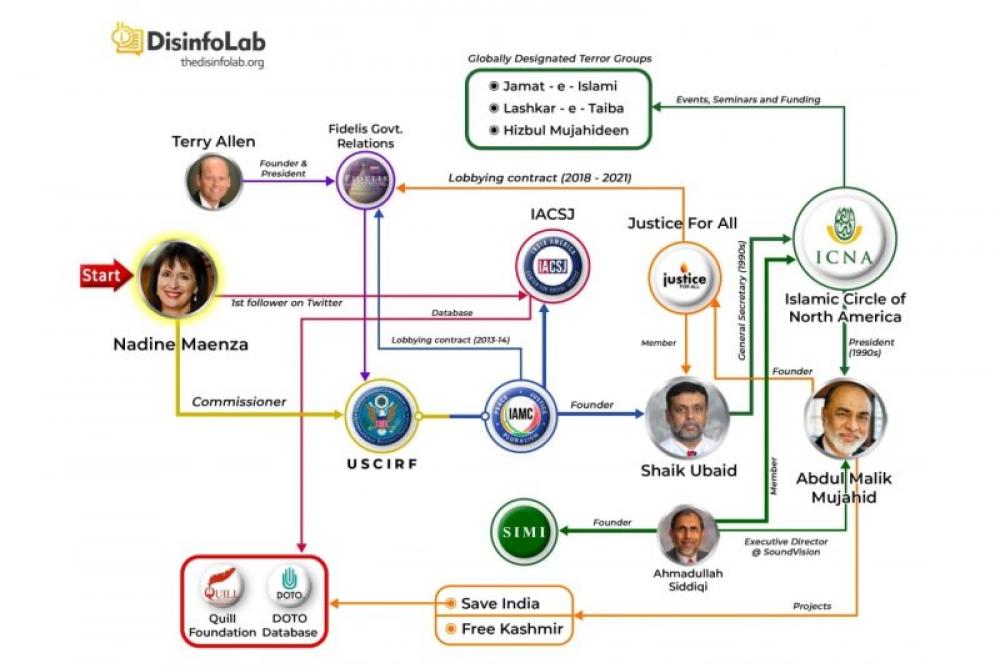 Earlier this week, the United States Commission on International Religious Freedom (USCIRF) designated India among several nations as "countries of particular concern". However, experts feel the move is a deliberate attempt to malign the nation's image by Islamists who have infiltrated this American government body.

According to a non-profit combating disinformation, Islamists linked to Pakistan based terror networks have infiltrated USCIRF to discredit India.

What the report says:

In its report, released on April 22, the body said it monitored public health measures put in place to prevent the spread of Covid-19, and their impact on freedom of religion or belief.

The USCIRF has recommended 14 countries to the State Department to be designated as “countries of particular concern” (CPCs) because their governments engage in or tolerate “systematic, ongoing, and egregious violations.”

These include 10 that the State Department designated as CPCs in December 2020—Burma, China, Eritrea, Iran, Nigeria, North Korea, Pakistan, Saudi Arabia, Tajikistan, and Turkmenistan—as well as four others—India, Russia, Syria, and Vietnam. For the first time ever, the State Department designated Nigeria as a CPC in 2020, which USCIRF had been recommending since 2009.

The report also mentioned the implementation of CAA (Citizenship Amendment Act) and the NRC (National Register of Citizens) which caused a huge nationwide uproar.

A well-planned move to malign India?

However, according to DisinfoLab, a non-profit organisation tackling disinformation, the move to have India on the list is well planned, lobbied and advanced by groups and individuals with vested interests.

"...This target is two pronged: On one hand, they have been trying to diminish the soft power India enjoys globally starting with the credo of non-violence of Mahatma Gandhi to Yoga and Chai; and on the other hand trying to replace this with made up narratives of ‘Islamophobia’ and ‘Rising Fascism’ in India. Depending upon the ruling party in India, the nature of target changes, but never stops,"  it said.

"While the MEA, India has rejected USCIRF locus standi, no one realized that the Report was a result of a planned lobbying effort to influence USCIRF by US Islamic Circle of North America & its fronts. ICNA has links with Jamaat-e-Islami & terror groups like, HM, LeT & SIMI," a tweet by the organisation read.

"The ICNA fronts operate in various names (Justice for All; Save India; Free Kashmir) to hide their affiliations but are run by the same set of people. Two key people are Shaik Ubaid and Abdul Mujahid who were associated with ICNA having close links with Jamaat-e-Islami," another tweet read.

According to the organisation, a US-Pakistan nexus which invests heavily in Pakistan based terror networks, has managed to infiltrate the USCIRF.

"This infiltration has been carried out by US based Islamist groups Indian American Muslim Council-IAMC & Islamic Circle Of North America(ICNA) and a plethora of fronts created in between. Important to note is that ICNA has strong links with Pakistani Jammat-e-Islami and global terror groups – Lashkar-e-Taiba & Hizbul Mujahideen," it said.

It said that this nexus is run by the same set of people by the means of several fronts, to give itself credibility. "...Justice for All; Burma Task Force; to Save India have been created to provide a sense of grandeur and credibility. In addition it obviously helps to hide the identities of real people," the DisinfoLab report said.

"The fronts under the able guidance of Shaik Ubaid is IAMC. IAMC had managed to influence the USCIRF through Commissioner Nadine Maenza, with the help of US lobbying firm Fidelis Government Relations (FGR). This nexus has also been running a very effective module within India through ‘DOTO database’ and ‘Quill Foundation’. This is a fabricated database to hype the atrocities of minorities. The database is also the basis of proving Islamophobia and fascism in India," it added.

USCIRF recommendation to the US government about India:

Designate India as a “country of particular concern,” or CPC, for engaging in and tolerating systematic, ongoing, and egregious religious freedom violations, as defined by the International Religious Freedom Act (IRFA);

Impose targeted sanctions on individuals and entities responsible for severe violations of religious freedom by freezing those individuals’ or entities’ assets and/or barring their entry into the United States;

Advance human rights of all religious communities in India and promote religious freedom and dignity and interfaith dialogue through bilateral and multilateral forums and agreements, such as the ministerial of the Quadrilateral;

Past attempts to hurt India:

Meanwhile, in its report, the USCIRF has urged the Biden administration and Congress to "champion religious freedom and to center the safety and dignity of religious communities as foreign policy priorities".

The anti-India lobbying has been so effective that the USCIRF had changed India's map in its 2014 report. While Jammu and Kashmir, Ladakh and Arunachal Pradesh were removed from India's map, the organisation remained tight-lipped about the cause of the changes.

On its part, the Indian government has regularly rejected the USCIRF reports due to its biased nature. However, if Joe Biden- who is known for his anti-right stand- decides to pay heed, the South Asian nation may face sanctions.