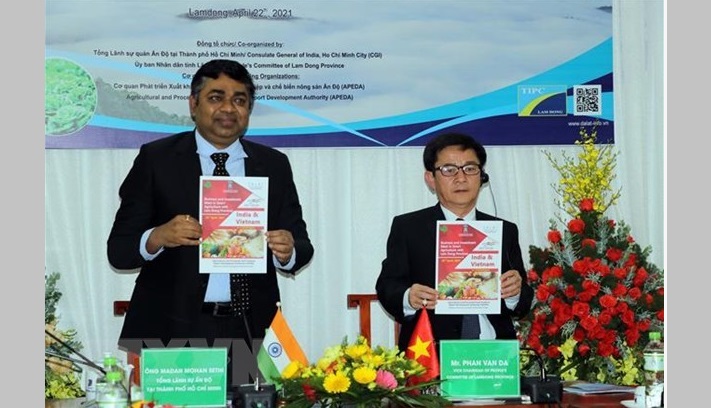 As a locality that leads the way in high-tech agriculture in Vietnam, the Central Highlands province of Lam Dong holds advantages in cooperating in this regard with different countries from around the world, including India, an online conference has heard.

The conference was jointly held in Lam Dong’s Da Lat city by the provincial People’s Committee and the Indian Consulate General in HCM City on April 22.

It was reported at the event that the province exported 110 million USD worth of goods to India last year, mainly coffee, silk yarn, and bauxite-aluminium.

Cooperation, however, has yet to match potential and the strengths of both sides, a provincial official said.

Indian Ambassador to Vietnam Pranay Verma said that more than half of agricultural exports from Lam Dong have gone to India and expressed a hope that the two sides will become strategic, comprehensive partners in agriculture.

On this occasion, Lam Dong introduced several major projects, including a tomato processing plant in Don Duong district and the Ka Do industrial complex, as well as incentives for domestic and foreign agricultural processing firms.

Indian partners asked questions regarding solutions to ease the impact of climate change and greenhouse gas emissions from agricultural production, saying they want to import Vietnamese products such as garlic, honey, and fruit.

Madan Mohan Sethi, Indian Consul General in HCM City, pledged that Indian State management agencies, organisations, and businesses will stand side-by-side with Lam Dong in agricultural production and consumption and share their experience with the province.