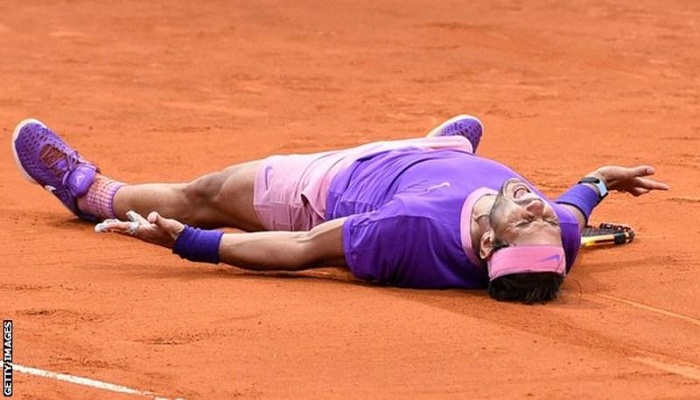 Nadal trailed 4-2 in the opener but recovered, breaking twice to take it.

The victory, which took three hours 38 minutes, gave the 34-year-old his 61st clay court title and came against an in-form opponent who had won his maiden Masters crown in Monte Carlo last week.

"Winning the trophy here means a lot," said Nadal, who had only lost one set in 11 previous finals in the Spanish city.

"I have been increasing my level and this was an important victory for me."

Tsitsipas, who recovered from two sets down to beat Nadal at February's Australian Open, started this match strongly before the Spaniard turned the opening set around.

Nadal again came from a break down in the second set after Tsitsipas had regrouped well.

That took him to the brink of victory on the court named after him but Tsitsipas showed his own mettle to stay in the contest, recovering from 15-40 at 4-5 with two fine points, including a lovely touch volley winner on the second.

A topsy-turvy tie-break saw Nadal lead 4-2 then save two set points from 4-6 only to serve a double fault at 6-6 that helped Tsitsipas clinch it.

The third set was serve dominated until 4-5, when Nadal wobbled on his own delivery, but ultimately it was the Spaniard who proved just the tougher.