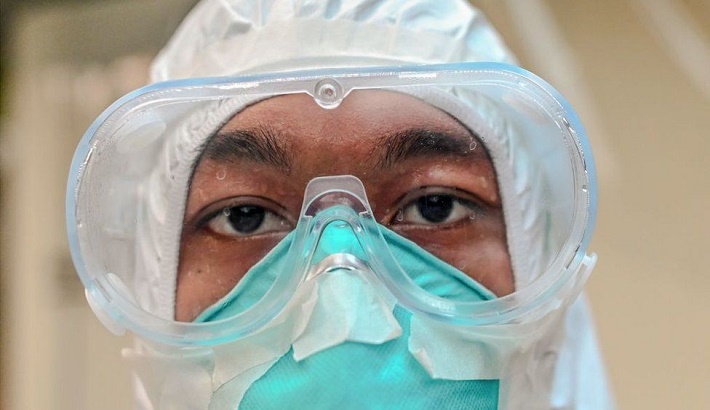 Myanmar's front-line medical workers are finding themselves in a precarious position, torn between their patients and working for a military government enforcing a brutal crackdown on the country.

Moe* is 53 years old and has stage three breast cancer.

She used to go for radiotherapy treatment every three weeks at the state-run Mandalay General Hospital in northern Myanmar.

But the day after the military deposed Myanmar's elected government in a coup on 1 February, the hospital closed its doors. Doctors, nurses and other medical workers all walked out in protest and have not returned.

Now Moe cannot afford the roughly $700 (£502) she would need to complete her remaining cycles of treatment at a private hospital.

Without it, she believes she has around a year to live.

Nevertheless, she does not blame the doctors: "It's the fault of the military," she told the BBC.

"Even if I die with cancer, I can accept it. The rest of the people in Myanmar deserve democracy."

Myanmar's healthcare system has been one of the worst-affected sectors in the aftermath of a coup on 1 February which saw the military seize control of the country, sparking widespread protests.

Thousands of doctors have joined the country's civil disobedience movement which has seen public employees and other state officials refusing to work under the new military regime.

Myanmar's public healthcare system accounts for around 80% of all hospitals and clinics and provides heavily subsidised care to the country's 54 million people.

This virtually vanished overnight - and in the midst of a global pandemic.

"It's a grim situation," says Dr Mitchell Sangma, who is on the ground for humanitarian organisation Medicins San Frontiers (MSF) in Myanmar's main city Yangon. "The public health system is near collapse."

But doctors feel they have little choice.

"For as long as the military junta stays in power I will not return to work," says Kyi Kyi* a doctor in Mandalay who has been on strike for nearly three months.

"I do not want to recognise their authority in any way."

But she quickly realised this was too dangerous: "We started seeing soldiers stationed around the hospitals, waiting for us to arrive."

Reports say the military has been targeting healthcare workers on strike, raiding voluntary medical facilities and arresting, detaining, and in some cases, severely beating workers.

"We have to be very careful," says Kyi Kyi.

"After the coup we were all forced to leave our government accommodation near the hospital, so now I have to stay with some friends in another part of town. We are very scared."

The few public sector healthcare facilities that are still running have been occupied by soldiers.

The military has tried to persuade some doctors to come back - with some recent appeals to senior department heads in the major hospitals - but they have had little to no success so far.

Dr Sangma says there have been efforts to run rudimentary operations inside poorly staffed wards and outside in hospital car parks.

But observers say many citizens are too scared to even access this basic care because they are wary of the army or they fear repercussions from the community for engaging with the military.

The situation has caused private hospitals - which are concentrated in the major cities - to be completely overwhelmed. Some initially tried to absorb the financial costs for patients, but this has largely stopped too.

"This has left most of the population without access to vital and often life-saving care," says Joy Singhal, the Myanmar Head of Delegation for the International Federation for the Red Cross and Red Crescent Societies.

And the pandemic has further complicated matters.

Dr Singhal says Myanmar's healthcare system had in January began rolling out its vaccination plan. But the people involved in this are now "no longer there".

"We are facing an imminent crisis on the Covid front," says Dr Singhal.

"Mass protest gatherings, virtually no testing and lack of access to treatment all pose a great risk to public health."

Official statistics from the now military-controlled Ministry of Health and Sports have become unreliable, but even a glance at the reported infection rates shows that the testing system is broken.

In January, the month before the coup, Myanmar recorded 15,515 cases of Covid-19.

In March, the month after the coup, it recorded only 538 cases - an apparent drop of 97%. Experts say that with no epidemiological overview, it's likely the disease will spread uninhibited and with deadly consequences.

The coup's aftermath is also being felt when it comes to other infectious diseases. Doctors say that Myanmar's slow but steady progress over the past 20 years on deadly illnesses such as HIV and tuberculosis is already being reversed.

HIV, for example, was an emerging crisis in Myanmar in the 1990s, but new infections and Aids-related deaths had been falling - in part thanks to a government-run programme supported by international aid.

But the programme has now virtually been suspended in the wake of the coup, says Pavlo Kolovos, former Myanmar Head of Mission for MSF.

"It's terrifying," said Mr Kolovos. "It's really tragic to see all the advancements that Myanmar has made on the public health front disappear so quickly like this."

He adds that big international donors, reluctant to deal with the Ministry of Health and Sports, are also starting to pull their money out of key programmes which had provided a critical safety net for millions of long-term patients.

The question now for those inside and outside the country is how long Myanmar can continue in this way.

"We are walking towards a cliff edge and we just don't know how to resolve that," says Dr Singhal.

"Primary health care is the backbone of any proper society, and right now that has crashed."

Kyi Kyi has not been paid since January but she says she has enough savings and parental support to maintain herself for a while yet.

But she knows it is ultimately patients who are paying the price.

"The more we think about the patients, the more we suffer. But although we are suffering, we will not rest," she says.

"We believe our country is the most important thing right now, because otherwise we know we will suffer another 20 or 30 years."