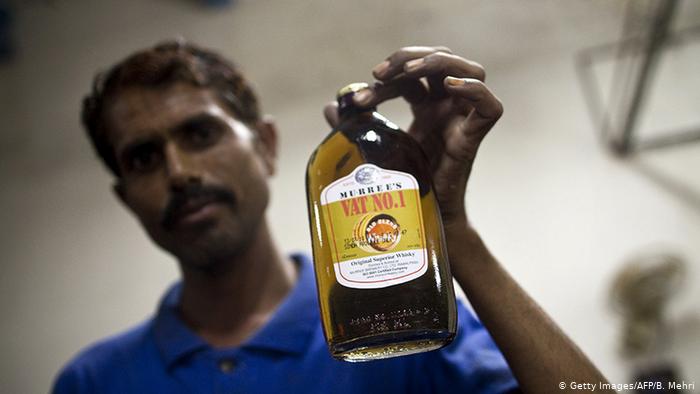 Drinking is officially forbidden for Muslims in Pakistan, which drives a thriving black market.

Scarcity and increased demand during the coronavirus pandemic have made tippling a costly affair.

Alcohol is largely prohibited for Muslims in Pakistan, but this doesn't stop a black market from ensuring a supply of illicit liquor. As in many countries around the world, there has been an overall increase alcohol consumption in Pakistan during the coronavirus pandemic.

Not all Muslims follow the rules, and well-healed drinkers can afford to buy market brand alcohol at a high premium. Those with lower incomes often turn to cheaply produced moonshine.

As the coronavirus pandemic has stressed supplies, both legal and black-market booze in Pakistan has become much more expensive.

Alcohol consumption has been controlled in Pakistan since 1977, when the populist government of Zulfikar Ali Bhutto enacted prohibition laws, with isolated exemptions for bars and clubs.

The ban was beefed up in 1979 under the Islamic regime of General Zia-ul-Haq, who declared drinking alcohol to be "un-Islamic" and decreed severe punishments for selling alcohol to Muslims. However, so-called "wine shops" are allowed to be owned and operated in certain regions by non-Muslims who pay a heavy tax.

Rahul is a Hindu who works at a wine shop in Pakistan's most populous city, Karachi. Wine shops are legal in Pakistan's southern Sindh province for non-Muslim customers. However, Rahul said he delivers alcohol to anyone who will pay.

"Muslim, Hindu, Christian, many people drink. It's none of my business what their religion is," Rahul told DW, adding that he must be cautious.

"We have to be careful in this business as people can try to get you in trouble," he said.

Rahul said he can make up to €280 euros every month at the wine shop, including tips from loyal

customers for deliveries, a much better wage than his former job as a cotton laborer.
Wine shops like Rahul's are unique to Sindh province, and are not found in the rest of Pakistan. In other parts of the country, Muslim drinkers buy alcohol on the black market.

The booze bought at Sindh's legal wine shops has a somewhat controlled price. However, black market alcohol prices have surged in the rest of Pakistan during the pandemic.

Wine shops are not allowed to officially sell alcohol to Muslims

Omer, a 37-year-old singer in Islamabad said that more people are drinking during the pandemic, despite the spike in prices.

"Since last year, I have gone from being a social drinker to mostly drinking alone and everyday, as I go out less, but alcohol helps me cope with anxiety as well," Omer told DW, adding that drinking is still taboo, and many Pakistani's who drink feel alienated.

Omer said that prices of local beer and liquor tripled during the 2020 lockdown, and currently still sell at double the old price. A bottle of local vodka that sold for €8 now goes for €19.

Hira, a 38-year-old journalist, told DW she bought a bottle of "Black Label" whisky for €70, and it was watered down. Other people she knows also have ended up with imported brand-label liquor that had been diluted.

"You are wasting so much money because you cannot trust imported bottles from the black market" she said, adding that she now prefers to drink locally produced Murree Brewery Beer.

"It is good enough, but one does get sick of the lack of choice," she said.

A gin assembly line in Pakistan

Isphanyar M. Bhandara, CEO of Pakistan's Murree Brewery, told DW that when the brewery was closed last year for several weeks between March and April, all production and distribution was halted.

During those two months, Bhandara said sales were at a standstill, and they had to waste large quantities of production material like wheat.

"COVID hit during the peak of our beverage season … so we only made 50% of our usual profit, but that is still better than many other companies that sadly went bankrupt," he said.  In the first few months of 2021, however, sales have been up.

Still, Bhandara said his brewery faces a social stigma in Pakistan, and Murree keeps a low profile and does not advertise. Founded in 1860 to meet the demands of thirsty British personnel at a Punjab resort, Murree is the oldest and largest producer of alcoholic beverages in Pakistan.