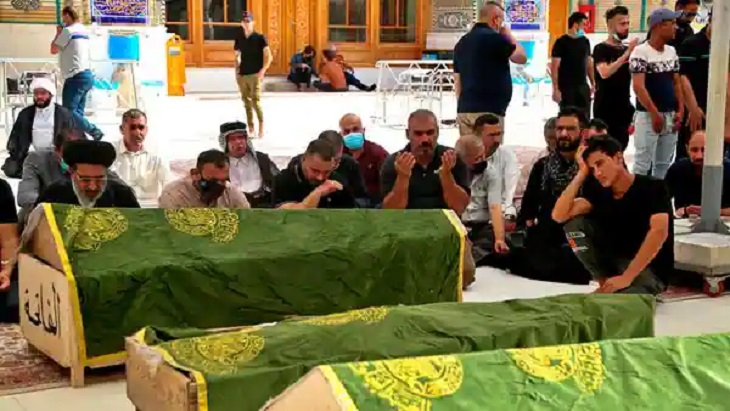 More than 80 people died Sunday in a fire that ripped through an Iraqi Covid-19 hospital, sparking anger and prompting the suspension of top officials in a country with a long-dilapidated health infrastructure.

Many of the victims were on respirators and were suffocated or burned in the smoke and flames when the blaze at eastern Baghdad's Ibn al-Khatib hospital started with an explosion caused by "a fault in the storage of oxygen cylinders", medical sources said.

The health ministry said 82 people were killed and 110 wounded, while the Iraqi Human Rights Commission said 28 of the victims were patients who had to be taken off ventilators to escape the flames.

The blaze spread quickly across multiple floors in the middle of the night, as dozens of relatives were at the bedsides of the 30 patients in the hospital's intensive care unit where the most severe Covid-19 cases are treated, a medical source said.

Prime Minister Mustafa al-Kadhemi suspended Health Minister Hassan al-Tamimi -- who is backed by the powerful Shiite leader Moqtada Sadr -- amid angry calls on social media for him to be sacked, as part of a probe that would also include the governor of Baghdad.

Kadhemi also declared three days of national mourning, while parliament said it would devote its Monday session to the tragedy.

Witnesses said the evacuation was slow and chaotic, with patients and their relatives crammed into stairwells as they scrambled for exits.

"It was the people (civilians) who got the wounded out," Amir, 35, told AFP, saying he saved his hospitalised brothers "by the skin of his teeth".

Iraq's hospitals have been worn down by decades of conflict and poor investment, with shortages of medicines and hospital beds.

But many also said negligence and endemic corruption were to blame for the deadly inferno.

"The tragedy at Ibn al-Khatib is the result of years of erosion of state institutions by corruption and mismanagement," President Barham Saleh tweeted.

The fire triggered outrage on social media, with a hashtag demanding the health minister be sacked trending on Twitter, a demand echoed by the human rights commission.

Baghdad governor Mohammed Jaber also called on the health ministry "to establish a commission of enquiry so that those who did not do their jobs may be brought to justice".

The Iraqi Human Rights Commission denounced a "crime against patients exhausted by Covid-19 who put their lives in the hands of the health ministry and its institutions.

"Instead of being treated, (they) perished in flames," it added.

Witnesses and doctors told AFP many bodies had yet to be identified, the remains too charred by the intense flames.

One of the victims, Ali Ibrahim, 52, had been treated for coronavirus at the Ibn al-Khatib hospital and was buried by his family on Sunday at Zaafaraniya, a neighbourhood near the hospital.

"He had spent 12 days in hospital and was due to be discharged on Saturday evening after recovering. He was just waiting for the result of the last Covid-19 test," one of his relatives told AFP.

Kadhemi also suspended the head of the health department in eastern Baghdad, the hospital director as well as those in charge of security and maintenance at the medical facility.

All of them are being questioned, he said, adding that no one would be released "until those who have done wrong are brought to justice".

He also pledged to submit the results of the investigation to the government within five days.

The UN's top representative in Iraq, Jeanine Hennis-Plasschaert, expressed "shock" at the tragedy and called "for stronger protection measures to ensure that such a disaster cannot reoccur".

Pope Francis, who paid an historic visit to Iraq in early March, called for "prayers" for all the victims of the fire.

On Wednesday, the number of detected Covid-19 cases in Iraq surpassed one million, the highest of any Arab state.

The health ministry has recorded more than 15,000 deaths since the pandemic broke out last year, and has carried out around 40,000 tests daily from a population of 40 million.

Iraq rolled out its vaccination campaign last month and has received nearly 650,000 doses of different vaccines -- the majority by donation or through the Covax scheme for low and middle income nations.

Around 300,000 people had received at least one dose as of Sunday, the ministry said.