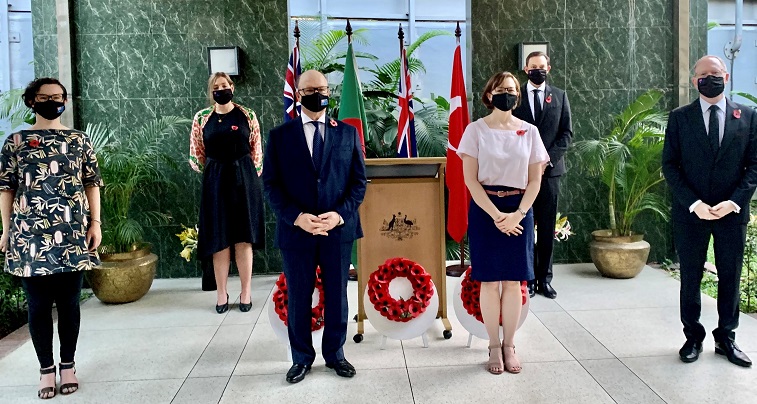 The Australian High Commission in Dhaka on Sunday (April 25) observed the 106th Anniversary of Anzac Day paying tribute to Australian and New Zealand servicemen and women who died in wars and conflicts.

On April 25 in 1915 troops from the Australian and New Zealand Army Corps landed in Gallipoli, Turkey.

That was the first time Australian troops fought together as a nation, said the Australian High Commission in Dhaka on Sunday.

“Anzac Day is the day Australians come together in remembrance. But as we continue to face the COVID-19 pandemic, we come together in spirit, instead of in person, to keep the Anzac spirit alive and honour our veterans and service,” Bruer said.

The High Commissioner remembered the brave individuals who have served, and continue to serve, during times of war and peace, including the 30 Australian and New Zealand airmen who died in the Burma campaign during the Second World War, and whose graves are located at the Chittagong and Comilla War cemeteries.

Among the tens of thousands of soldiers from many countries who lost their lives during the eight-month-long campaign were more than 8,000 Australians and 2,700 New Zealanders.

As a descendant of one of the original Anzacs, Bruer said one of the aspects of Anzac Day of which he was most proud was the way it has brought old enemies together.

The High Commissioner said that during the Gallipoli campaign the ANZACs forged a reputation for courage in adversity, dedication to duty and self-sacrifice.

Recognising the difficult circumstances arising from the COVID-19 crisis, the High Commissioner thanked service personnel around the world, who are playing their important part in responding to the pandemic and helping to save lives.