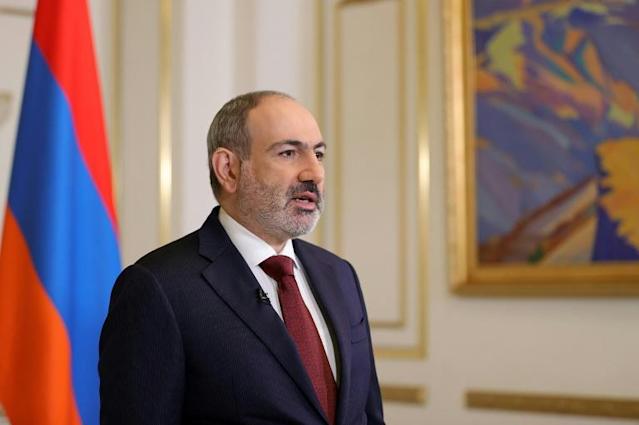 Armenian Prime Minister Nikol Pashinyan resigned on Sunday while retaining interim duties, formalising a parliamentary vote to be held June 20 in an effort to defuse a protracted political crisis.

Pashinyan has faced calls to stand down since signing in November a Russian-brokered peace agreement with Azerbaijan that ended a war between the two arch-foes for control of the disputed Nagorno-Karabakh region.

“I am resigning from my post as prime minister today” to hold the snap vote on June 20, he said in an announcement broadcast on his Facebook page.

After Pashinyan announced his resignation, all members of his cabinet handed in their own resignations, as required by Armenian law.

Pashinyan said he would continue to fulfil his duties as head of the interim government.

Armenia’s humiliating defeat at the hands of Azerbaijan’s technologically superior army spurred mass protests in the impoverished ex-Soviet republic on the borders of Turkey and Iran.

The tiny Caucasus nation’s military, equipped with ageing Soviet-era hardware, struggled to hold ground it had controlled for three decades when clashes broke out against Azerbaijan’s better-equipped army in Nagorno-Karabakh in September.

After six weeks of fighting that claimed around 6,000 lives, the peace accord forced Armenia to cede swathes of territory to Azerbaijan.

Pashinyan has insisted he handled the war correctly, saying he had no choice but to agree or see his country’s forces suffer even bigger losses and that snap polls were the best way to end the post-war political stalemate.

The 45-year-old former newspaper editor came to power spearheading peaceful protests in 2018 and initially brought a wave of optimism to Armenia.