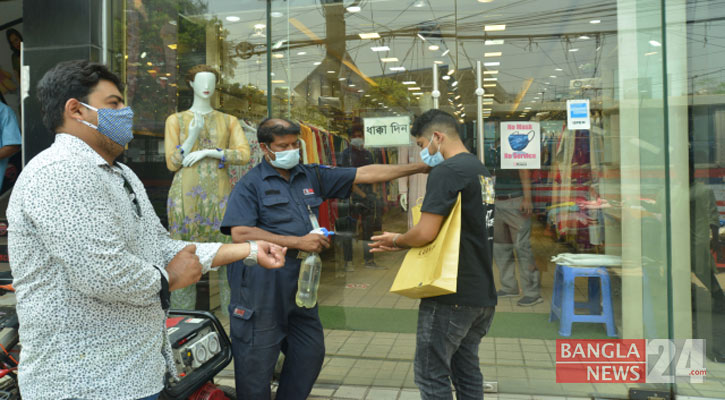 The number of private vehicles, rickshaws and auto-rickshaws marked a significant rise on the roads in the capital on Sunday as the government allowed shops and shopping malls to reopen their doors to shoppers on a limited scale.

The pressure of vehicles on the city streets was reported from areas like Mirpur, Gabtoli, Shyamoli, Uttara and Mohakhali amid the lockdown, which has been extended by another week to deal with the worsening Covid-19 situation.

In a circular on Friday, the government allowed the shops and shopping malls to remain open from 10 am to 5 pm from Sunday, prompting many people to return to the capital city.

Although the movement of rickshaws on the main roads were relatively lower in the morning than the other days, those were found moving in backstreets.

However, no public transport and other city services were seen on the city streets.

The owners and workers of shops, markets and shopping malls were seen busy reopening their doors since 9 am.

While talking to UNB at Rajlaxmi in Uttara, traffic inspector Akhter Hossain said: “The pressure of vehicles is increasing. But such pressure was not there during the last few days since the enforcement of the strict lockdown on April 14. This is happening following the government’s decision to allow shops and shopping malls to reopen.”

However, the movement of rickshaws was comparatively thinner than the other days, he added.

Another traffic inspector, Asaduzzaman, said: “There has been huge traffic in Mohakhali area since morning and our colleagues (fellow police officers) were asking the public for movement pass at designated check posts.”

Strict lockdown in place since April 14

A surge in coronavirus cases prompted the government to go for an eight-day complete lockdown from April 14. The cabinet division issued a notification in this regard on April 12.

Later, following the shattering situation of Covid-19 cases, the government extended the ongoing lockdown by another week from April 22 to bring the situation under control.

A circular was issued on April 20 extending the ongoing strict lockdown for another week from April 22, aiming to curb the transmission of Covid-19.

As coronavirus cases continued to rise alarmingly since mid-March, the government imposed a loose nationwide lockdown for one week from April 5 as part of its move to contain its spread. Later, a stricter lockdown was declared from April 14 to 21.

On April 23, the Cabinet Division issued a notice allowing shops and shopping malls to operate from April 25 (10am-5pm) on the condition that they would maintain proper safety protocols.

The shops and malls are permitted to reopen from April 25 subject to maintaining proper safety protocols, says the notice signed by Deputy Secretary Md Rezaul Islam.

Shops and shopping malls were shut from April 5 with a spurt in covid cases and deaths.

But the shopkeepers and traders waged street protests demanding the reopening of businesses. They argued that they had suffered massive losses last year during the lockdown.

Eid-ul-Fitr is generally the busiest time for businesses but last year’s Eid was celebrated amid the covid outbreak. Businesses had suffered huge losses.

On Saturday, Road Transport and Bridges Minister Obaidul Quader said the government is working on a plan to allow the public transport to resume operations once the current lockdown is over.

On May 31, the government raised the fares of all buses, including inter-district ones, by 60% as the vehicles are allowed to carry only half passengers of the total seats to ensure social distancing amid the Covid-19 pandemic.