Britain slashes aid to China by 95% to less than £1million amid furious row over Uighurs and Hong Kong, with Dominic Raab saying remaining cash will only be used to promote 'open societies and human rights' 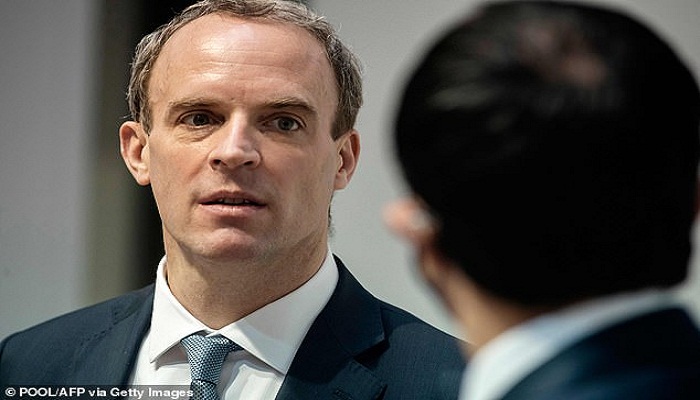 Britain is to slash its aid spending to China by 95 per cent and spend what is left on pro-democracy activities, Dominic Raab revealed today.

The Foreign Secretary said that the official development assistance (ODA) fund was being reduced from £18million to just £900,000.

The remaining cash will be used to 'fund programmes on open societies and human rights', he said in a written statement to Parliament.

The hardline move comes amid an increasingly glacial stand-off with Beijing over the communist regime's treatment of Uighur Muslims and the population of the former British territory of Hong Kong.

But Mr Raab faced criticism tonight for 'sneaking out' details of the ODA announcement, which sets out how the UK is cutting its budget from 0.7 per cent to 0.5 per cent of gross national inome.

The UK's foreign aid budget is set to fall below £10billion in 2021/22 to an estimated £9.985billion - significantly lower than the approximately £15billion which has been spent in recent years.

In his statement, Mr Raab said: 'The resulting portfolio marks a strategic shift, putting our aid budget to work alongside our diplomatic network, our science and technology expertise and our economic partnerships in tackling global challenges.'

The move comes weeks after China's ambassador to Britain was summoned to explain revenge sanctions slapped onto MPs and academics critical of the Beijing regime.

Nine China hawks - plus four UK institutions - were targeted by the Communist regime for speaking out on its human rights abuses last month.

Prime Minister Boris Johnson said he stood 'firmly' behind them over the tit-for-tat move, which came four days after Britain, the US, Canada and the European Union placed sanctions on Chinese officials deemed responsible for human rights abuses against Uighur Muslims in the country's autonomous Xinjiang.

Former Conservative leader Sir Iain Duncan Smith, one of those targeted, said he would wear the sanctions as a 'badge of honour' for speaking out against activities branded 'genocide' by the United States and others.

The Government has also moved to allow millions of Honk Kongers to resettle in the UK, amid an increasingly authoritarian clampdown on democracy.

Beijing has been accused on undermining the 'one country, two systems' agreement it made before the former British Overseas Territory was handed back in 1997.

Mr Raab outlined how £8.11 billion of the aid budget will be allocated by the Foreign Office - approximately 80 per cent of the total UK spend - including £906 million for humanitarian preparedness and response.

Work involving that money will focus on countries most affected by risk of famine, including Yemen, Syria, Somalia and South Sudan.

Mr Raab said: 'We will focus on core HMG priorities for poverty reduction, including getting more girls into school, providing urgent humanitarian support to those who need it most, and tackling global threats like climate change, Covid recovery and other international health priorities.'

But Labour's Sarah Champion, chairwoman of the International Development Committee, said:  'To sneak out a written statement at the end of the day, shows a lack of respect for both Parliament scrutinising these cuts and the aid organisations that are hearing about the spend for the first time only now.

'To say the statement is scant on detail is an understatement. Whilst we now have limited understanding on the areas the Government is prioritising for its shrinking aid pot, we are still awaiting guidance on country-by-country allocations.

'People's lives are directly impacted by these decisions and it is shocking that they still don't have clarity they need.

'While it is very welcome that funding for Africa will receive 50 per cent of all UK bilateral ODA, it is disappointing that girls' education – a priority for No.10 – is second lowest thematic area in the ODA allocations and very surprising that China is still receiving money.'

Sarah Brown, the chairwoman of global children's charity Theirworld and the wife of former Labour prime minister Gordon Brown, added: 'Today Britain has surrendered its role in unlocking big change throughout the world.

'The aid budget represents a small investment which yields massive diplomatic, economic and security dividends for the UK government. Instead of saving and investing in the most vulnerable people to benefit their lives and maintain our own global connection and safety, these cuts put us all at risk.'