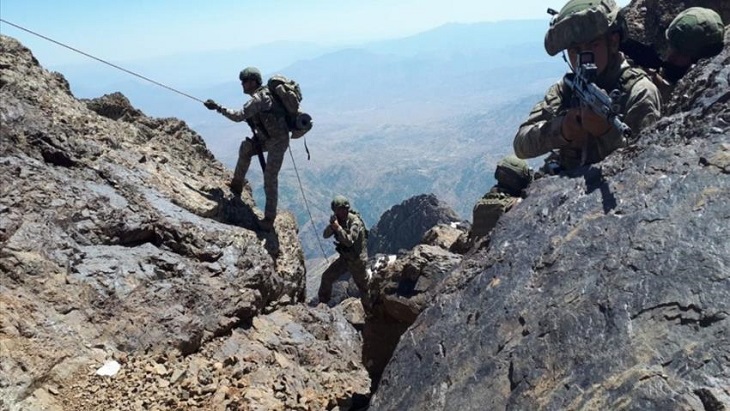 "Heroic commandos of the heroic Turkish Armed Forces are in northern Iraq," the defence ministry said in a tweet without specifying how many soldiers were involved.

The PKK, listed as a terror group by Turkey and much of the international community, has for decades used Iraq's northern mountains as a springboard for its decades-long insurgency against the Turkish state.

Speaking to the operation's command centre by video link, Erdogan said the offensive's objective was "to completely end the presence of the terror threat ... along our southern borders".

"There's no room for the separatist terror group in the future of Turkey, Iraq or Syria," he said in reference to the Kurdish militants.

"We will keep on fighting until we eradicate these gangs of murderers, who cause nothing but tears and destruction."

In February, Turkey launched an operation dubbed "Claw-Eagle 2" against PKK rebels holed up in the northern Iraqi region of Dohuk.

That raid created controversy because it was designed in part to rescue 12 Turkish soldiers and an Iraqi held captive by the PKK in a cave.

Turkey accused the PKK of executing the 13 men before they could be freed, and Erdogan came under attack for poorly planning the offensive from opposition parties in parliament.

The February raid also created problems in Turkey's relations with Iran, which now has a strong political and military presence in Iraq, and which treats Erdogan's regional campaigns with suspicion.

Iran's ambassador warned in February that Turkish forces should not pose a threat or violate Iraqi soil, prompting Ankara and Tehran to each summon the other's ambassador.

The Kurdish insurgency against the Turkish state is believed to have killed tens of thousands of people since being launched in 1984.