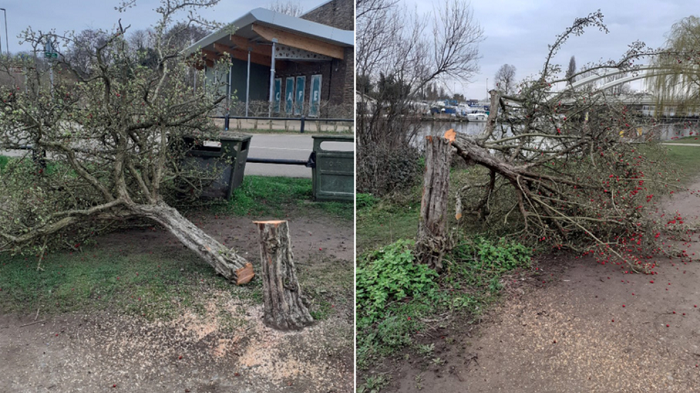 On a typical day, the picturesque district of Elmbridge would fit all the descriptors of any well-to-do English countryside locale: It's quiet, green and safe, a world away from the bustle of nearby London, and its residents take pride in its leafy landscapes and riverside views.

But these are not typical days in Elmbridge.

A chainsaw-wielding, tree-felling "maniac" has been roaming the sleepy region under cover of darkness, bringing down the area's greenery and mobilizing terrorized villagers to launch a surveillance operation in the hope of catching the offender.
The campaign of clandestine attacks began a month ago, and has rattled locals.

"I feel like he's playing a game with us," resident Cameron Flynn told CNN this week. "People are very confused by the whole situation ... Some people are scared because there's this maniac going around with a massive chainsaw, cutting trees."

But rather than cowering from the branch-chopping culprit, Elmbridge residents have banded together. A sleuthing Facebook group, the Elmbridge Tree Patrol, has amassed more than 1,200 members in weeks, and locals are posting tips and possible sightings on a daily basis.

Flynn, who created the group, said he was inspired by a local online litter-picking community. But within hours, his initiative has captured the fear and determination of the region.

Members have volunteered for nighttime patrols, the details of which are kept tightly guarded in case the phantom feller has joined the closed online group.

"This is now an emergency," one of the group's moderators, Rob Dash, told followers on Tuesday. "It is incredibly sad that someone is destroying these trees," Police Inspector Bert Dean added in a statement to CNN. "Not only are these a haven for wildlife, but they bring much pleasure to our community."

A vandalized tree along the banks of the River Thames in the Cowey Sale area of Walton-on-Thames, Elmbridge. Locals have described the situation as an "emergency."

Then, on Friday, came a development: Police had arrested a 24-year-old man in connection with the attacks, which had claimed at least 35 trees.

For Dash, who had been leading nighttime patrols between 10 p.m. and 3 a.m. for weeks, the news was long awaited.
"We have left our families behind, taken days off work to put in extra hours and made adjustments to our personal lives to try and catch this person," he wrote. "I have personally lived and breathed this for the last month."

But questions remain about whether more culprits are at large, if the suspect will be charged -- and how someone was able to roam a number of towns at night, chopping down trees and uniting a community in anger, for an entire month.

Trees have been chopped down in a number of Elmbridge's towns and villages, including the market town of Walton-on-Thames, and Cobham -- a village with close links to London that has become home to several entertainment figures and capital-based footballers.

The impact of the crimes on Elmbridge's reputation is not lost on some members of the Facebook group. Surrey was in danger of losing its crown as the UK's "leafiest county," warned one resident, Shelly Lumb.

The crimes have drawn a swell of media attention, with residents now finding themselves inundated with journalists requesting interviews and photographing the trees that have fallen victim.

Such a concerted campaign of criminal activity is rare in Elmbridge. Indeed, a glance at the social media of the regional police force indicates the crimes officers more commonly pursue: "PC Jo Fahey and PC Jake Boatman hot footed it down to the Claygate/Hinchley Wood area following a report of catapults being used," they told followers last week. "Didn't find them."

But officers had been receiving tips from the Tree Patrol sleuths for days, in the hope of finding the person whom some locals dubbed "Jack the Chipper."

"We have spent the past few weeks poring over CCTV and ANPR (number plate recognition data) data in an effort to identify who is felling the trees," a Surrey Police spokesperson told CNN ahead of the arrest, adding that the force had followed up on a number of leads from the community.

Residents believed the culprit was driving a red car, following a number of tips posted online. It is unclear whether the man arrested owns such a vehicle, but in its statement, the force said: "Surrey Police received a fantastic response from residents who contacted us with information, allowing investigating officers to identify a vehicle they believed to be connected.

"Last night (22 April), this vehicle was stopped. Searches carried out in the suspect's car and home address found several chainsaws and wood chippings."

Whether or not police have the right man, there is still no sign of a motive. The Facebook sleuths have eyed a number of theories, some more elaborate than others.

Michael Decker theorized that the culprit is in fact a militant resident, resorting to guerrilla tactics to draw attention to a planning concern along this section of the River Thames. "Long shot, but is this some sort of traditionalist who wants to bring the tow path back into use for towed boats on this stretch?" he asked.