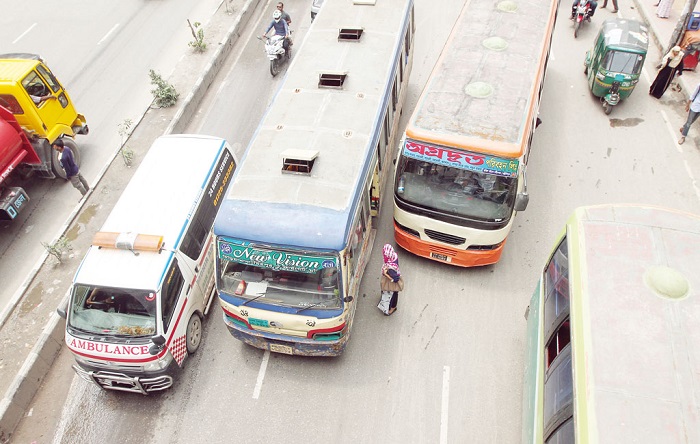 The government is working on a plan to allow the public transport to resume operations once the current lockdown is over, said Road Transport and Bridges Minister Obaidul Quader on Saturday.

Quader joined the meeting virtually from his official residence.

Bus owners and workers will face toughest action if any bus carries passengers more than 50 percent of its capacity or charges additional fare, the minister warned.

On May 31, the government raised the fares of all buses, including inter-district ones, by 60% as the vehicles are allowed to carry only half passengers of the total seats to ensure social distancing amid the Covid-19 pandemic.

Turning to a false campaign over the Digital Security Act, the Awami League general secretary said: “A particular political party is providing money and helping a vested quarter spread false propaganda both at home and abroad using the social media.”

Alleging that the opposition criticised the action taken by the government against those who violated the Cyber Crime Rules or Digital Security Act by spreading rumours, the minister said: “There’s no reason to think that you’ll be out of government action.”

The government is committed to providing digital security to people, he said adding that rumours and propaganda seriously disrupt security.

Quader also directed the officials concerned to take effective measures to upgrade the Faridpur-Bhanga-Barisal road to a four-lane one.

Urging everyone to follow health protocols even if the lockdown is relaxed, Quader, also Awami League General Secretary, said the use of masks and hand sanitisers should be made mandatory.