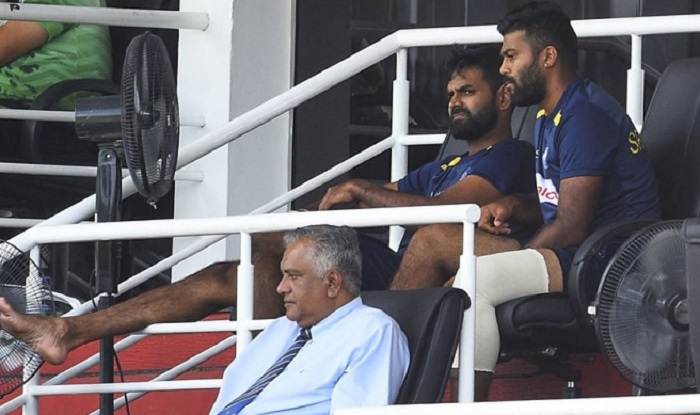 ‘’It's an MRI tonight and he have to go for a scan.  I do not know what more to say, we can only see how risky his disability is when the results come out,’’ said Thirmanne after the third day’s play.

‘’However, he will not be able to bowl further in this match.  The leg hurts just as much,’’ he added when reporters asked about the condition of Kumara, who sustained injury during the third day’s play.

Sri Lankan Skipper Dimuth Karunaratne led a fightback as he struck unbeaten 85 runs while Lahiru Thirimanne made 58 runs to guide the hosts to score 229-3 in 73 overs in their first innings against Bangladesh on the third day of the first Test in Kandy on Friday.

Bangladesh earlier declared their first innings on 541-7 in the first session of day three after resuming the overnight score of 474-4 and they are still leading by 312 runs at Pallekele International Cricket Stadium.

Two overnight batsmen – Mushfiqur Rahim and Liton Das both completed their fifties and made 68 not out and 50 runs respectively.

Sri Lanka made a strong start replying to Bangladesh’s mammoth first innings total as both the openers - Karunaratne and Thirimanne put up a 114-run stand before off-spinner Mehidy Hasan trapped the latter for lbw just before the tea break.

Thirimanne could have dismissed a few overs before on the same score but Bangladesh’s failure in taking a review for lbw off Taijul Islam saved him that time.