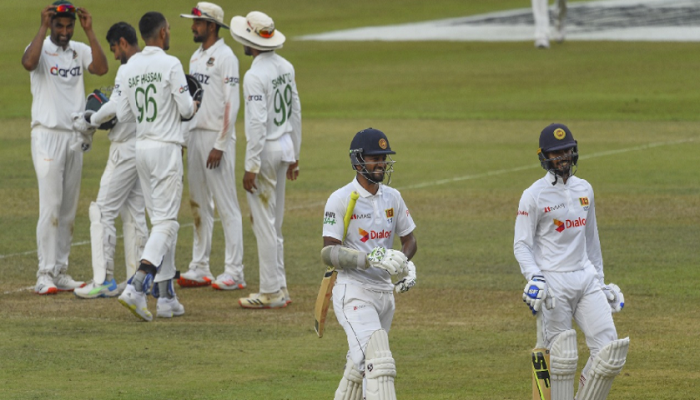 At the end of day three on Friday, captain Dimuth Karunaratne and all-rounder Dhananjaya de Silva were batting at 85 and 26. Sri Lanka are trailing by 312 runs with two days to left play.

The Lankans started well before the lunch break of day three, posting 114 runs in the first wicket stand, thanks to 58 off Lahiru Thirimanne.

Earlier, the Tigers declared the first innings at 541/7 in 173 overs before the lunch break of day three. This is the sixth-highest Test innings for the Tigers and the third-highest in overseas Tests.

Both overnight batsmen, Mushfiqur Rahim and Liton Das scored a 50 each. Liton fell prey to Vishwa Fernando, for 50, Mushfiqur remained unbeaten on 68.

Najmul Hossain Shanto and Mominul Haque dominated the first two days of the game, hitting a 100 each. It was the first Test 100 for Najmul, and Mominul recorded his maiden century in away Tests.

For Sri Lanka, Vishwa Fernando was the most successful bowler who bagged four wickets in the batting paradise, conceding 96 runs in 35 overs, while Suranga Lakmal, Lahiru Kumara and Dhananjaya de Silva took one wicket each.