TSC Renovation: How will the new look be? 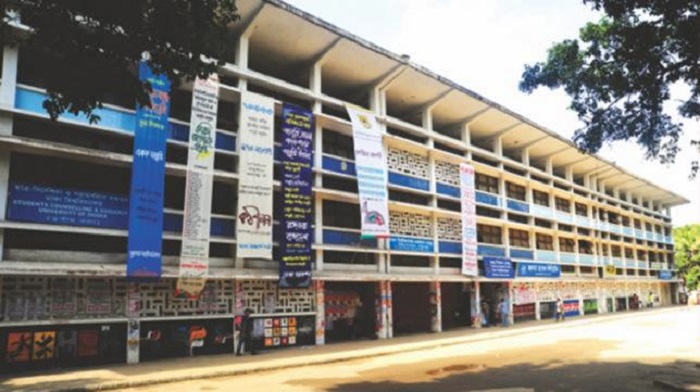 The Teacher-Student Centre, popularly known as TSC on the Dhaka University (DU) campus, was established in 1961. It is set to be renovated keeping its old structure as part of the university’s birth centenary celebrations in 2021.

The University authority primarily approved the new design provided by The Public Works Department (PWD) of the government but the construction work will start after Prime Minister’s approval. Before that, PWD proposed to rebuild TSC entirely, which sparked debate and anger among students, teachers and alumni.

Later, the authorities instructed PWD to form a new design keeping its old structure. After several meetings, both stakeholders signed off on the new design.

Prime Minister Sheikh Hasina on September 2 last year said a plan to modernize Dhaka Medical College Hospital (DMCH), TSC and Shahbagh’s Public Library. "Dhaka University is our university and we want to build TSC in a modern way," said the PM on that day.

She also said that she had already directed the authorities concerned to prepare its design in a proper manner.

According to the new draft design, TSC’s present structure will not be demolished. A 10-storied new building will be constructed where the swimming pool is now located.

He said the entrance of the new building would be from the west of TSC. The construction work will be started from the back where now the swimming pool is situated.

“Our engineering section is not involved with the designing or construction work, moreover the PWD will do as per the prime minister’s instruction,” he continued.

Mir Manzurur Rahman, Chief Architect, Department of Architecture, Ministry of Housing and Public Works, said, “We did a draft design following DU’s requisition. We cover almost all of the requisition including two auditoriums, a lecture theater, a gymnasium and some office space and others. We insert these requisitions into 10 storied building and Dhaka University is happy with our design.”

The TSC director provided a requisition list to the university's engineering department, which was subsequently submitted to PWD on October 18 last year by the DU authorities.

The acting chief engineer of DU Abul Kalam Sikder said, “PWD will provide the new design to the prime minister and if she approves the design, they will start construction work."

DU pro vice-chancellor (administration) Prof Muhammad Samad said, “This design is acceptable. It will be handed over to prime minister though PWD and final work will start if the PM approves the design.”

Prof Samad hoped that construction work would begin soon under the direct concern of the prime minister.

Mohiuddin Mahi, a third-year student of Mass Communication and Journalism said, TSC is the social and cultural hub of our campus which was built when the varsity had a small number of students.

“However, it has never been reconstructed again although the number of students and teachers has been increasing every year. So, this is a great initiative indeed but the authorities have to be sincere enough so that none of its tradition or aesthetic beauties get destroyed,” he added.

Echoing Mahi, Salman Siddique, president of Socialist students’ front said, "Yes, there is a need to improve some aspects of TSC. We do not oppose modernization of TSC either. But authority have to be more sincere so that none of tradition and beauties get destroyed.”

But there are lots of problems including accommodation crisis authority should pay heed first, he said.

TSC at a glimpse

The TSC is an invaluable part of Bangladesh’s cultural heritage and among the modern architectural landmarks of the country.

The Greek legendary architect, planner and theoretician Constantinos Apostolos Doxiadis (1913-1975) designed TSC during the early 1960s and later the TSC building was built as part of the so-called Decade of Development (between 1958 and 1968) of the then Pakistani regime.

The structure exemplifies a modernist architectural sensitivity toward spatial needs for tropical climatic conditions. It blends local parameters of space-making -- particularly the indoor-outdoor continuum and generation of space around courtyards -- with international-style visual expression of building forms.

TSC's dome-shaped structure is considered an iconic landmark in Dhaka city. It has been home to countless students who show up between or after classes for a cup of tea with friends, and holds immense nostalgic value for them on top of being a historically significant site.

There were several attempts to renovate the structure earlier, but they were stopped subsequently. One of them was to demolish the swimming pool next to the TSC and build a nine-storey building. The initiative of renovation by keeping the original structure intact, however, did not see the light of day.