Dark tourism takes to the sky above Chernobyl 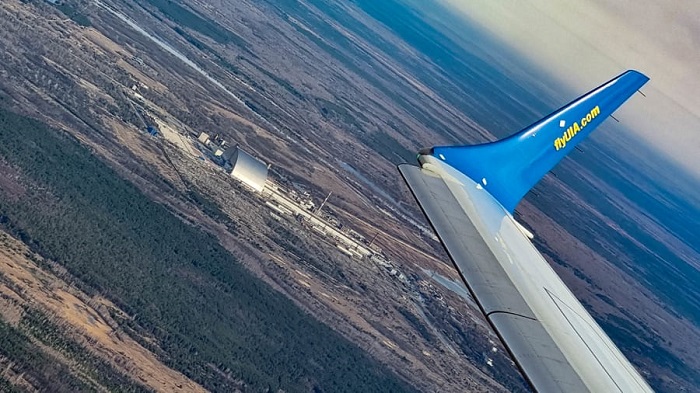 If you've ever dreamed of seeing the site of the world's worst nuclear disaster from the air, now may be your chance.
To commemorate the 35th anniversary of the catastrophe this month, an aerial tour is being offered that will give passengers a chance to gaze down on the Chernobyl Nuclear Power Plant and the abandoned city of Pripyat.

The tour, operated by Ukrainian International Airlines, will take place on April 25, the eve of the date that Chernobyl's Reactor No, 4 exploded in 1986, sending a toxic plume of radioactivity into the skies over Europe.

It's a straightforward itinerary. For about $106 (2,970 Ukraine hryvnia), participants will get a place on an Embraer 195 passenger jet that will take off from Kiev's Boryspil Airport, then fly north to Chernobyl, taking in panoramas of the Exclusion Zone around the power plant.

Also available, according to UIA's description of the tour, is an opportunity to "take a photo in the cockpit and take a selfie with the pilot." The ticket also includes an aviation geek treat with a side tour of a Boeing 777 parked on the apron at Boryspil.

During the flight, organizers say the aircraft will stay above the minimum permitted height of 900 meters over Chernobyl, getting as close as possible to the nuclear power station without compromising safety.

Inflight information will be provided by guides from Chernobyl Tour, a well-known Ukrainian company that specializes in

And while it might seem odd to while away one major disaster by contemplating another that happened three decades earlier, organizers say the trip wouldn't have happened without Covid.

"To be honest, this tour was made possible only due to the pandemic," says Bohdan Skotnykov, UIA's head of project for the flight. "There is an available aircraft and our team has some free time to do creative projects."

Skotnykov says Covid-19 safety precautions will be in place during the flight in line with others operated by UIA. Passengers and crew will strictly adhere to quarantine rules both at the airport and on the plane.

It's not the first time UIA has operated this kind of trip. Several previous flights sold out in two days and garnered rave reviews.