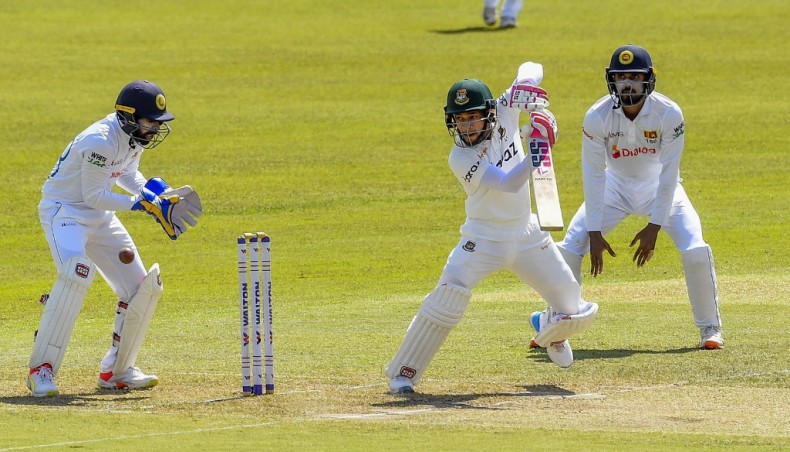 Sri Lanka made a very circumspect start to their reply to Bangladesh's 541, having added eleven runs in the eight overs they batted till lunch. Taskin Ahmed, on his return to the Test team after four years, asked several questions of the openers, particularly in the last over before the break.

Lahiru Thirimanne survived a close lbw call when the Taskin delivery struck him as he left the ball. But umpire Kumar Dharmasena's decision was overturned when replays showed the ball was not hitting the off-stump. Later, a bouncer also got Thirimanne in trouble, before he finished the over with a boundary.

Earlier in the first session, Bangladesh declared their innings on 541 for 7, having added 67 runs in 90 minutes. Both Mushfiqur Rahim and Liton Das reached their fifties, taking the tally of 50-plus scores to five, only the third such occasion in Bangladesh history.

Liton was slightly more forceful with his 67-ball 50 although Mushfiqur remained dogged with his 68 off 156 balls. Only towards the last couple of overs of their innings did Mushfiqur and Taskin Ahmed slog a few.

But it was a strong start for the visitors to get a 500-plus total, built largely on centuries from Najmul Hossain Shanto and Mominul Haque. Tamim Iqbal had given them a brisk start with his 90 on the first day. Shanto made 163, his maiden century, having added 144 for the second wicket with Tamim, and 242 with Mominul, a Bangladesh record for the third wicket.

Mominul made 127, his first overseas hundred, off 304 balls having struck eleven fours. It was his slowest hundred as the normally free-flowing batter contained himself to support Shanto, who was batting under pressure following a poor West Indies series earlier in the year.

For the home side, Vishwa Fernando took four wickets while Suranga Lakmal, Lahiru Kumara (who didn't bowl in the morning session due to a hamstring strain) and Dhananjaya de Silva picked up one each.