Myanmar government should have a seat at ASEAN summit: Fortify Rights 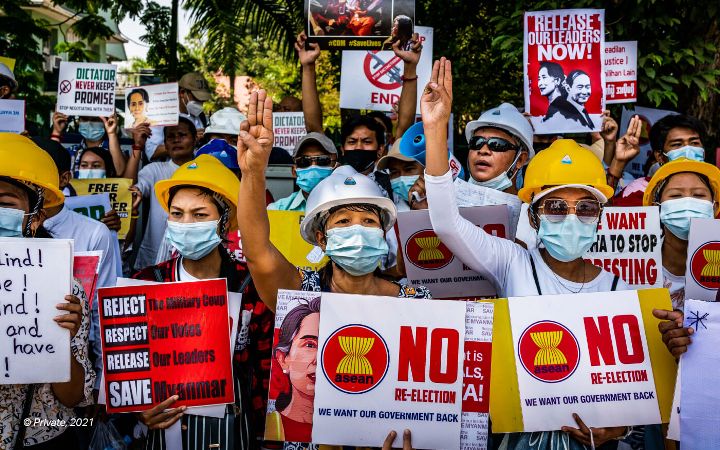 The Association of Southeast Asian Nations (ASEAN) should work with the newly formed National Unity Government in Myanmar and the broader international community to bring an end to the Myanmar military junta’s attacks and ensure a transition to democratic, civilian rule, said Fortify Rights Friday.

Myanmar coup-leader Senior General Min Aung Hlaing is expected to join a special ASEAN summit on Myanmar on April 24 in Jakarta while ASEAN sidelined the National Unity Government from the discussions.

“ASEAN should use this special summit as an opportunity to collectively reject the February 1 coup and the military’s subsequent attack on civilians, recognize the legitimacy of the National Unity Government, and garner collective support for economic sanctions and an arms embargo against the Myanmar military .”

If Sen. Gen. Min Aung Hlaing fails to demonstrate an immediate end to the junta’s attempted coup and attack on civilians, then ASEAN member states should consider ousting Myanmar from the regional block, said Fortify Rights.

The junta took over the executive, judicial, and legislative levers of power and, on February 2, created the military-appointed State Administration Council to rule the country.

On April 16, ousted members of parliament, anti-coup protest leaders, and representatives of Myanmar’s ethnic minorities announced the establishment of the National Unity Government.

Since the February 1 coup, junta-controlled security forces reportedly killed more than 700 people and detained more than 3,000 in a brutal, nationwide assault against the population.

It has also cut internet access and mobile data nationally, preventing the population from communicating with each other and beyond.

“ASEAN can no longer hide behind its flawed policy of non-interference. Governments in this region need to show leadership and stand with the people of Myanmar by categorically rejecting the junta and recognizing the legitimate civilian leadership.”