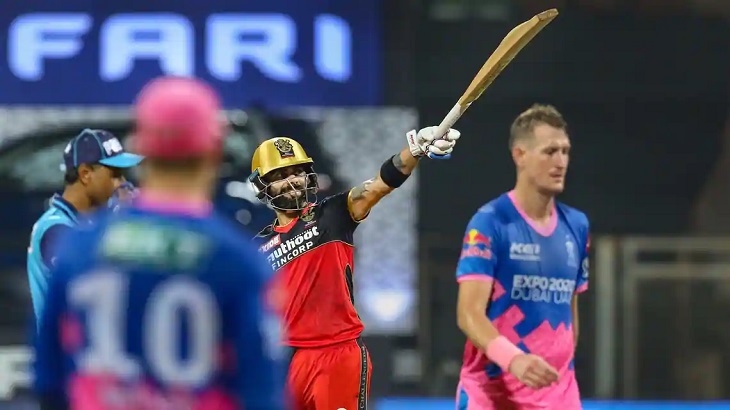 Skipper Virat Kohli became the first batsman in the Indian Premier League to cross 6,000 runs as his Royal Challengers Bangalore extended their unbeaten run to four this season on Thursday.

Devdutt Padikkal, who hit 101 - his maiden IPL ton, and Kohli, who made 72, stood undefeated as Bangalore thrashed Rajasthan Royals by 10 wickets in Mumbai to reclaim top spot in the eight-team table of the Twenty20 tournament.

Bangalore chased down their target of 178 with 3.3 overs to spare.

Kohli warned his fans not to get "over-excited" as Bangalore search for their maiden IPL title.

The left-handed Padikkal raised his hundred in just 51 balls as he hit 11 fours and six sixes.

Kohli witnessed the 20-year-old's innings from the other end and praised the youngster for a stellar show.

"It was an outstanding innings. He did pick the right areas to hit and once he got going it was almost impossible to stop him," said Kohli.

"Great talent, great one to watch out for in the future. I had the best seat in the house and thoroughly enjoyed his innings."

Kohli, who smashed three sixes in his 47-ball knock, started cautiously and slowly picked up the pace as he reached his first fifty of the season in 34 balls.

The skipper soon went past 6,000 IPL runs in 196 games to increase the gap between him and number two IPL scorer Suresh Raina of Chennai Super Kings (5,448 in 197 matches).

"You can't always be the guy going dominant," Kohli said on playing second fiddle to Padikkal.

"Tonight my role was different and I wanted to hang in there. In the end I picked my spots, the pitch was good."

Pace bowler Mohammed Siraj and Harshal Patel claimed three wickets each to set up victory after Bangalore kept Rajasthan down to 177-9.

Siraj struck early with two key wickets of Jos Buttler, for eight, and David Miller, for nought, as Rajasthan slipped to 18-3 after being put into bat first.

Shivam Dube's 32-ball 46 boosted the Rajasthan total but in the end it proved well below par.