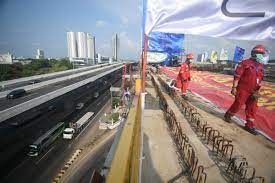 China’s top economic planner has warned that the impact of Covid-19 and increased political risks in countries taking part in the Belt and Road Initiative are among the main challenges the multibillion-dollar project faces in the next five years.

A report by the National Development and Reform Commission outlining the country’s development over the course of its new five-year plan also identified what Beijing regards as the key problems and tasks the infrastructure project faces.

It identified changes to global governance and trade systems, the ongoing rivalry between China and the US, and growth in emerging markets as the most important factors affecting the project.

While China was the only major economy to grow last year, the report said domestic financial and construction companies taking part in the scheme still faced challenges.

“Due to the impact of the coronavirus pandemic, the world economy is in recession and under increasing pressure. The foundation of our country’s economic recovery is not yet steady. Some local governments and enterprises have certain difficulties in their economic and financial situation, the resources they can put in to the Belt and Road Initiative will be affected,” the latest document from the NDRC said.

“However, the pandemic’s impact on the economy is only short term and is under control overall. This will not change the great development potential,” the document added.

“Some BRI countries have long term high geopolitical risks and certain regions have seen an escalation in conflict,” the report said, without specifying which countries.

What is China’s Belt and Road Initiative all about?

“The pandemic has made these risks greater. International trade conflicts and the pandemic caused countries to compete for strategic materials and the distribution of resources”.

The report added that the pandemic has hit trade and investment in some belt and road countries, although the report said this would increase their need to sign up for the project.

The initiative, which was first introduced by Chinese President Xi Jinping in 2013, has prompted warnings by Western countries that Beijing is trying to use it to expand its geopolitical influence and catch developing countries in a “debt trap” by lending large sums that will draw foreign governments into Beijing’s political orbit.

Beijing has repeatedly denied the debt trap accusation and says it only wants to foster trade and connectivity through global infrastructure building.

The project has faced multiple hiccups, however, and the pandemic has adversely affected about 40 per cent and seriously affected about a fifth of belt and road projects, according to a survey last year by China’s foreign ministry.

The projects affected include the US$6 billion Jakarta-Bandung high-speed railway extension on the Indonesian island of Java. The line, built by a consortium of Chinese and Indonesian companies, was originally expected to be operational by early next year, but Reuters reported that it has now been delayed by two years.

China has overseen more than US$700 billion in contracts and investment in 139 since 2014, according to a Moody’s report published in November.

The National Development and Reform Commission said that to meet these challenges the Belt and Road Initiativeshould prioritise existing schemes and increase its relevance to the “international and regional development agenda”.

“[There is a need to] push forward the development strategies and strengthen implementation with countries that are comparatively more willing to cooperate, and implement agreements that have been signed,” the report said.

The NDRC also said that efforts to internationalise the yuan should continue at a “steady and careful” pace by “steadily pushing forward dual-currency cooperation” with participating countries.

The Belt and Road Initiative is seen by China as a useful platform to push forward its long-term goal of turning renminbi into a reserve currency used for international trade, investments and payments, and the project’s massive loan and investments deals also involve currency swap agreements.