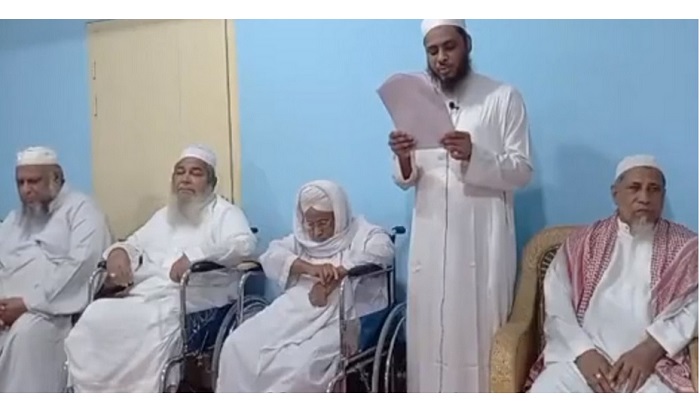 Hefazat-e-Islam, a radical outfit making headlines for violence and atrocities across the country, has appealed to the countrymen to extend financial help to its Hathazari madrasa which is struggling for existence.

Fountainhead of Hefazat’s rise, the Chattogram-based madrasa is incidentally suffering from fund shortage at a time when the government started investigation into sources of income of the group and expenditure channels.

Many think seeking help from people by Hefazat is contrary to its countrywide atrocities.

Hefazat unleashed a reign of terror in Hathazari of Chattogram, Brahmanbaria, Narayanganj, Dhaka and Kishoreganj damaging land office, railway stations and other important establishments and clashed with police resulting in death of many people and injuring score others.

Hefazat men attacked a Hindu minority village of Noagaon at Shalla upazila in Sunamganj. They unleashed the attack allegedly at the behest of Hefazat-e-Islam Joint Secretary General Mamunul Haque.

The organisation also turned Baitul Mukarram National Mosque into battlefield protesting Dhaka visit of Indian Prime Minister Narendra Modi. A section of fundamental groups including Hefazat is against India which sided with Bangladesh in liberation war in 1971.

Hifazat-e-Islam tried to be thrust on the centre-stage of Bangladesh politics by violence, especially 2013 Dhaka blockade programme. On May 5, 2013, thousands of supporters from Hathazari and some other places besieged Sapla Square in order to allegedly oust the government.

Junaid Babunagari, the then secretary general of Hefazat-e Islam, reportedly held a secret meeting with BNP chairperson Khaleda Zia, just a week before the blockade programme.

A recent scandal of Mamunul Haque spending time with wife of another person at costly Royal resort at Sonargaon of Narayanganj in the outskirt of Dhaka prompted Prime Minister Sheikh Hasina to question source of money of the group.

Ironically, Hefazat demands ban on foreign culture including ‘free mixing of men and women’, candlelit vigil and sculptures of anybody at anyplace.

It also wants Islamic education from primary to higher secondary levels to be mandatory and women’s education policy be scrapped.

However, Bangladesh Financial Intelligence Unit (BFIU) has started a probe into bank accounts of leaders of Hefajat-e-Islam which let loose violence in different parts of the country.

BFIU seeks information as to the accounts of 24 persons and 30 madrasas having links to extremism.

Junaid Babunagari has alleged that government is harassing them in the name of probing into madrasa bank accounts.

A video posted on facebook page claimed that Hathazari madrasa is unable to bear the burden of 8,000 students and 100 teachers and staffs. Out of the students, 4,700 are exempted from tuition fee and cost of food and accommodation.

The Hefazat leaders requested countrymen to give Fitrah and Zakat money to the madrasa which relies on donation.

They also cited significance of donation to religious organisation in the month of Ramadan.