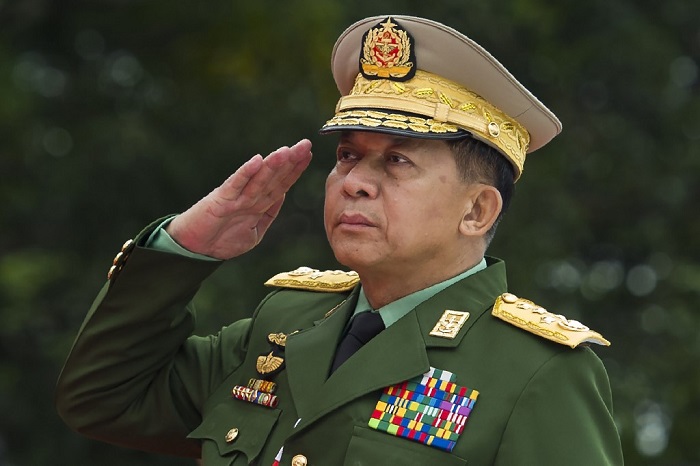 The summit would be for discussing the situation in Myanmar and the first meeting of ASEAN leaders since the military seized power from the elected government of Aung San Suu Kyi in a Feb. 1 coup.

Military spokesman Maj. Gen. Zaw Min Tun told Kyodo News that Min Aung Hlaing will attend the summit in person. But the spokesman did not give any more details of the leader's participation.

The special summit of the Association of Southeast Asian Nations was called for by Indonesian President Joko Widodo in March as protests against the military rule and its harsh crackdown on protesters continued.

But the Myanmar military commander's attendance at the summit can be taken to mean that ASEAN member nations admit him as the representative of Myanmar and protesters against the military rule are raising strong objections to his participation.

A group comprised of pro-democracy forces in Myanmar, the Committee Representing Pyidaungsu Hluttaw, was opposed to ASEAN inviting the coup leader to the special summit.

Sasa, who has handled the group's communication with overseas media, said in his Facebook post Friday that ASEAN's invitation to Min Aung Hlaing "will bring not only great shame to the summit but will be considered as great insult" to the people of Myanmar.

But ASEAN member nations are apparently seeking a peaceful resolution to the crisis in Myanmar by bringing the junta leader to a discussion table.

The members share a sense of crisis that the credibility of the grouping could be harmed unless it takes initiative in mapping out a procedure for improving the situation in Myanmar, some sources said last week.

Since the Myanmar military seized power, security forces have killed 738 people as of Monday, according to a tally by the Assistance Association for Political Prisoners based in Thailand and Myanmar.