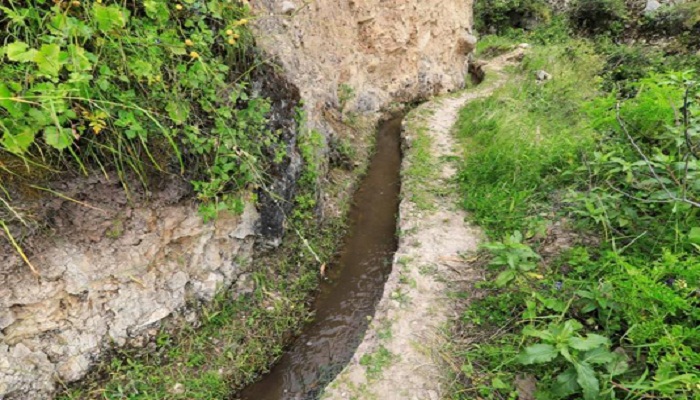 In the mountains of western Peru, a farming community is restoring a network of stone canals built more than a millennium ago, hoping the pre-Columbian technology holds the solution to its water problems.

Known locally as “amunas”, the water-retention system is thought to have been devised by ancient people who lived in what is now the Huarochiri province some 1,400 years ago, before even the Incas, to prolong the rainy season’s bounty.

The canals that furrow the mountain slopes reroute runoff to patches of permeable soil or rock where the water seeps in, filters through and replenishes aquifers before emerging in springs downslope weeks or months later, in drier times.

The practice is known as “sowing” water, to be harvested later, after the rainy season, when it is needed to nourish people, crops and livestock.

“We are ranchers, farmers, and every drop of water… helps our survival,” said Roosevelt Calistro Lopez, 43, one of 900-odd inhabitants of rural San Pedro de Casta, some 80 kilometers (almost 50 miles) from Lima, and about 3,200 meters (10,400 feet) above sea level.

“The amunas are not new for us, but we are improving them. There are places where they had gone dry where there is water again,” he told AFP.

“The amunas already exist. What we are doing is restoring” them, said Mariella Sanchez Guerra, director of the Aquafondo water-access initiative which started the initiative with the participation of the local inhabitants in 2017.

The canals do not serve only the inhabitants of Huarochiri.

They also feed the Santa Eulalia river, a tributary of the Rimac river that provides some 80 percent of water consumed in Lima, one of the world’s biggest desert cities.

Every kilometer of amuna that is put into operation allows the transportation of 178,000 cubic meters of water per year, and Aquafondo hopes to boost from 20 percent to 80 percent the amount of water collected by the ancient system for the thirsty capital.

Some 120 people from the community are paid by Aquafondo to carry out the rebuilding work, which is not always easy going.

There is a risk of falling while working on the slopes in windy conditions, and the heavy stones have to be lifted by hand and carefully locked into place.

Work can only be done between October and December, before the rainy season arrives.

The coronavirus pandemic has further complicated matters, hitting Peru’s economy with a collapse of the all-important tourism sector, and a sharp fall in prices for agricultural products that deeply affected the farmers of Rimac river.

“We mulled for days whether we should continue the work on the amunas or not, we did not want to put anyone at risk” of contracting the coronavirus, said Sanchez Guerra.

“But we were also very concerned about (maintaining) the income generated for the community through their labor.”

For Calistro Lopez, the project is also part of his heritage.

“When I was a boy, I heard my parents say that we had to ‘sow’ the water at the top. Now I understand it.

“We carry this in our blood and veins, and we do it with pride and will.”