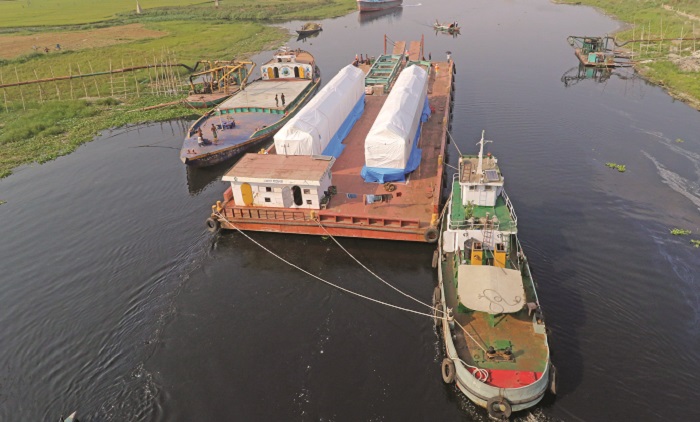 The first train set for Dhaka Metro Rail Project arrives in the capital from Mongla on Wednesday. In the photo taken from Birulia, a barge was seen heading towards Diabari Depot carrying the train set. --Md Nasir Uddin

The first consignment of metro rail coaches arrived in Dhaka on Wednesday afternoon two days before the scheduled time.

This consignment was supposed to reach Dhaka on 23 April. Earlier on March 30, the trains were unloaded at Mongla port. They were carried from Japan’s Kobe port on March 4 through a ship MV SPM Bankok.

The ship first carried the metro rail coaches to Payra seaport on March 24 and then to Mongla port on March 30. The following day, the coaches were unloaded from the ship.

The metro rail coaches were carried to Chandpur through barges through the river route on Monday last and now reached Dhaka.

A joint venture of Japan’s Kawasaki and Mitsubishi are manufacturing a total of 24 sets of metro train. Each set will have four coaches and two locomotives on each side, a project official said.

The stainless steel trains will have the system to supply 1500 volts DC power. Each air-conditioned train will have the capacity to carry 738 passengers at a time. There will be two wheel chairs in each train for disabled people.

The metrorail coaches are being made in line with Japanese safety standard. Each coach will have a total of four doors, two each on both sides.

According to the latest information of DMTCL, 62 percent work of the metro rail project called MRT-6 line from Uttara 3rd phase to Motijheel has been completed so far.

The work of the mega metro rail project has been going on in full swing amid the second wave of coronavirus, especially in Mirpur and Agargaon parts of he capital.