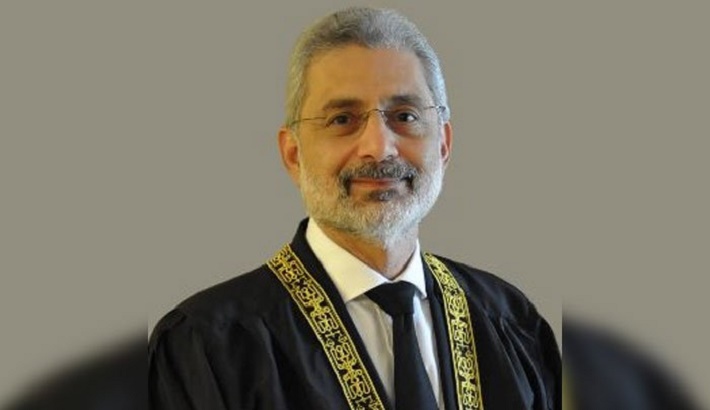 Justice Qazi Faez Isa, during hearing of review petitions against the Supreme Court’s last year order of June 19, remarked that a sword of Damocles has been hanging over his head for the last two years.

Expressing his regrets over becoming emotional and exchanging hot words with two members of the bench, hearing his review petition, he said “the government wanted to expel me as the Supreme Court judge” in one way or the other.

Earlier, the Supreme Court (SC) Monday directed the registrar office to provide Justice Qazi Faez Isa with a copy of the report, filed by the Federal Board of Revenue (FBR), regarding an inquiry conducted about London properties of his spouse Sarina Isa.

A 10-member larger bench of the apex court, headed by Justice Umer Ata Bandial, resumed hearing in the identical review petitions against its last year order of June 19, referring the matter to the FBR, directing it to initiate tax proceedings against the spouse and children of Justice Isa.

FBR Chairman Javed Ghani had submitted the final report to the office of Chief Justice of Pakistan, who is also chairman of the Supreme Judicial Council.

The court observed that it had been admitted in the notice of FBR that Sarina Isa had sent London more money than the actual price of London’s properties and the transaction was made through banking channels.

Justice Yahya Afridi observed that the actual price of London properties was 751,000 sterling pounds, while Sarina Isa had sent more money for purchasing the properties from 2003 to 2014 through banking channels, and the FBR, in its show-cause notice, had admitted that fact.

“What is important for us that the money was sent in accordance with the law and through proper banking channels,” Justice Mansoor Ali Shah remarked, adding that money was the property of the petitioner, Sarina Isa, and for what purpose, it was utilised, it did not matter.

Justice Bandial told Sarina Isa that it was good that the money for the purchase of property abroad was not from Hundi, but through banking channel.

“I was not party to the instant case; however, decision came against me and my children,” Sarina Isa contended, adding that she and her children were mentioned many times in the judgment.

She informed the court that she had approached the SC Registrar for recordings and transcript of the main case. “But I was not provided with the transcript and record of the case by the Supreme Court registrar,” she added.

Justice Isa said that he had not filed a single application for adjournment of the Supreme Judicial Council. He said that his spouse was not a lawyer; therefore, he requested the court not to interrupt her in arguments and she would answer all the queries of the court.

“We are not interrupting her, but as she is appearing in-person, therefore she will have to answer court’s questions,” Justice Bandial told Justice Isa. “We acknowledge that you are most affected by the court proceedings, but we will look into the record as this is not a matter relating to any illegality but sources of income for which she will have to satisfy the court,” Justice Bandial told Sarina Isa.

“Madam if you have any record of sources of your income by which you have bought London’s properties, then please show us,” Justice Bandial asked Sarina Isa. She, however, submitted that she had already provided the court details pertaining to London properties, adding that Inland Commissioner FBR Zulfiqar Ahmed did not deal properly with her sources of income and did not incorporate in the notice details regarding her salary, rent of properties as well details regarding the properties which were sold out.

She submitted that she had been paying taxes since 1982. Justice Muneeb Akhtar asked Sarina Isa the FBR report had stated that there was a contradiction in her statement. “You are a 50% shareholder in the other two properties, but you did not answer the FBR question and changed your stance,” Justice Muneeb told her.

Sarina Isa, however, said that one property abroad belonged to her, while she is a shareholder in the other two properties. “I have given 100% answers and I have never changed my stance as well,” Sarina Isa replied.

Meanwhile, Sarina Isa said that former chairman FBR Jehanzeb Khan did not order conducting of an inquiry against her spouse for which he was removed from his office, adding that the official did not fulfil the illegal desire, expressed by Shahzad Akbar.

She, however, contended that the Inland Commissioner had levelled allegations against her of concealing the assets and she was not provided an opportunity of defence. “The important point is that you have made transaction through banking channels for purchasing the properties abroad and you have transferred the money from your own account,” Justice Yahya Afridi asked Sarina Isa.

Justice Maqbool Baqir asked Sarina Isa to compact her arguments. Meanwhile, Justice Qazi Faez Isa came to the rostrum and said in a lighter vein that the bench had termed her spouse a better lawyer than him. “Can I hire her as my counsel,” Justice Isa asked the bench. “But you got late now and you should have done this earlier,” Justice Sajjad Ali Shah told Justice Isa with a smiling face.