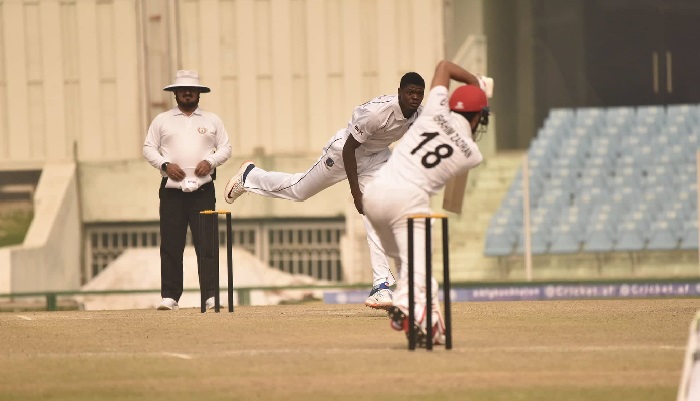 Afghanistan’s Ahmed Shah Pakteen became the first umpire from his country to be an on-field umpire in a Test match.

The bearded 44-year-old man is considered to be one of the leading umpires of his country and now seems to be living his dream by making debut as a Test umpire during the two-match Test series opener between Afghanistan in UAE.

During an exclusive chat with Daily Sun he discussed his journey so far along with support he received from Aleem Dar during his debut in Test.

Here are the excerpts

Can you tell us how you felt when you went to officiate your first Test match considering for every umpire it a dream to come true and for you it must even as you are the first umpire from Afghanistan to achieve it?

It was a very proud moment for me officiating a Test match on behalf of Afghanistan as each and every umpire has a dream to become the Test umpire and I was really happy to achieve this goal.

There was Alim Dar with you in the other end? What kind of conversation you had with him during the Test match?

It was really nice to have an umpire like Aleem Dar and match referee like Ranjan Madugalle as both of them are very experience in their respective field and they provided me moral support. Aleem was really supportive and friendly person and we had discussion before the match and we had good preparation for the Test match. I found him really nice and supportive on and off the field.

Did he give you any tips that will make you a better umpire?

We had good discussion about the match and player’s management and also some field techniques and he shared his experience with me. I had learned many things off and on the field from him.

There were no DRS in the Test? Was it more challenging for umpires?

As an umpire it is challenge to run a Test match without DRS, but I have an experience and used to it considering I am used as a umpire to non-DRS ODI and T20I matches of Afghanistan.

In the recent past there is lot of talks regarding DRS? What is your take on that and how you think technology is helping the umpires?

What prompted you to take umpiring as a profession?

Probably my personal love and passion for cricket helped me be an umpire. To be honest during the time when I was playing cricket I was willing to do umpiring from my team side.  In 2003/2004 ACC conducted umpiring course in Kabul I thought to get part in umpiring course as I had interest in umpiring and you can say it started my career as an umpire.

While in other parts of the world there is lot of umpire’s education program? How did ACB develop you in this regard?

We have some educational courses inside and outside of Afghanistan from ICC and ACC as well as from ACB. The courses were really supportive but from 2016 when I become as development penal umpire in ICC, I had learned lots of things about umpiring because in ICC events there are proper coaches for umpires which give an opportunity to learn and ask many questions. These experiences really helped promote my umpiring skills and knowledge.

To develop Test umpires’ other countries, make sure that they are trained by officiating first-class cricket regularly. But you have stood only in eight first class matches so far?

It’s true that I had been involved in eight first-class matches but that us because we have received first-class status in 2016 but during that time and even afterwards I am busy in Afghanistan home series and also in ICC events and that is the reason I had less chance to officiate in our domestic events. We are the first generation of umpires in Afghanistan and I have lot of experience of three day, and two day matches before and I did umpiring in ACC and ICC events as well which gave me lot of knowledge and experience to officiate Test match.

What is your next goal?  There is no one in ICC elite umpire panel from Afghanistan though there are few who are in the international panel?

I am trying my best to serve as much as I can in my field, and I hope there will be a day near that we will have an umpire in ICC elite penal.

You made your debut as an international cricket umpire in January 2017 and stood in 15 ODIs and 20 T20Is. Tell us how was your journey so far?

It was not easy for me to officiate the matches in the start of my journey as we are the first generation of umpires in Afghanistan and we had no umpires before us from whom we should get any experience, field technique or knowledge of umpiring.  I learned a lot about umpiring after 2012 when I participate in ACC Level 2 Umpiring course in Malaysia as after that course ACC give me chance in different ACC events to officiate matches which helped me a lot. Now we have good system in ACB for umpire’s developments and also we have good domestic structure and lots of domestic events to develop our umpires.