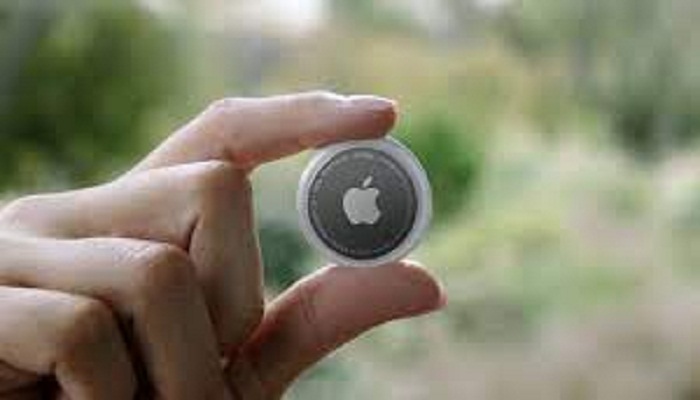 Apple has shown off its latest product line-up in its first big event of 2021.

The firm is increasing the number of products which will contain its own in-house developed M1 chip, as the sector struggles with a global semiconductor shortage.

It finally unveiled its much-anticipated tracker tile, the AirTag, which will launch at the end of April.

And it announced its first significant update to the iconic iMac desktop computer in recent years.

What was not discussed, but was later shared by Apple, was the roll-out of the latest version of its operating system, iOS 14.5, which will include a controversial update limiting what app owners can see about user activity outside of their own apps without permission.

It's a popular business model for "free" internet services, including Facebook, which use the data they gather on their members' online habits to target advertising.

AirTags have been highly-anticipated by Apple fans. They are small round disks which can be attached to anything, and transmit a Bluetooth signal to a home gadget - an iPad or iPhone - to alert the user to their location.

AirTags will cost £29 ($29 in US) and are due to launch on April 30, said Apple engineering program manager Carolyn Wolfman-Estrada. They work with all devices containing the U1 chip, which includes the iPhone 11 (which launched in 2019) and later models.

She also said they were designed to "track items not people", with features such as rotating identifiers and audible alerts from unknown tags built in to protect privacy.

Colleen Novielli showed off new super-thin iMacs in seven different colours, built with Apple's new M1 chip, and a 24in, 11.3 million pixel screen, along with a revamped camera and other upgrades. One of Apple's older products, the iMac has not seen a significant revamp for years.

However, it only has a top RAM (the device's short-term memory) of 16GB, putting it on a par with the older Mac Mini.

"It is little surprise Apple has resisted updating the iMac over the last few years, given the transformational impact the M1 architecture has had on the overall design," commented Leo Gebbie from CCS insight.

"This is an endorsement of Apple's multi-year, multi-billion-dollar investment in creating its own silicon platforms which now power all its key devices."

The M1 chip, an ultra-wide camera and 5G data connectivity are all coming to the new iPad Pro, said product manager Raja Bose.

The M1 chip will make the latest version's graphics performance 1,500 times faster than the original, he said, in a presentation which focused on the iPad's graphics and gaming benefits.

The new model will also feature up to 2 terabytes of storage.

According to analysts IDC, the tablet market overall grew in 2020 for the first time in seven years, with sales driven by consumers and education providers during the global pandemic.

"Tablets emerged as a reliable alternative for consumers to meet their needs for content consumption and provide access to remote schooling during the lockdown," said Daniel Goncalves from IDC.

Mr Goncalves added that many households had bought extra tablets in the last 12 months, in order to keep up with their increased use.

Apple also announced a new subscription podcast platform, in keeping with its move towards streaming services, first announced in 2019.

And it showed off a new 4K Apple TV, with a re-designed Siri remote and HDR (High Dynamic Range). HDR offers a greater range of colours, making pictures more vivid and realistic. Sky launched an HDR service last year for a selection of its nature documentaries - but only to customers with specific premium subscriptions.