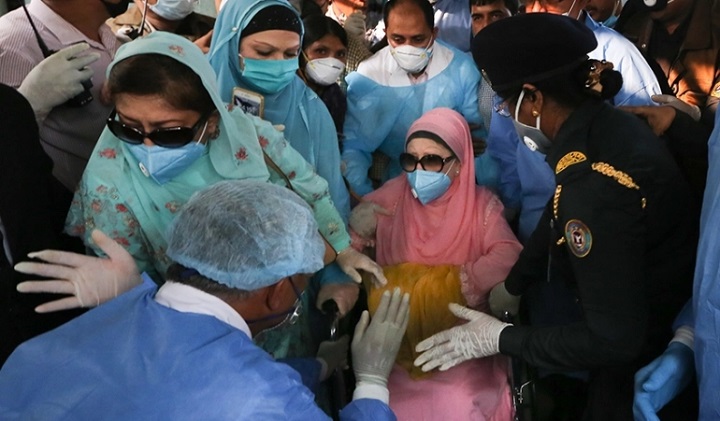 The health condition of BNP Chairperson Khaleda Zia, who was infected with coronavirus, has improved further as her fever subsided, said party vice chairman and her medical team member DR AZM Zahid Hossain on Tuesday night.

Talking to reporters in front of the BNP chief’s Gulshan residence after examining her health condition, he said “Today (Tuesday) is the 13th day of Khaleda Zia's corona infection. By the grace of Allah, she had no fever in the last 24 hours.”

Zahid said Khaleda has normal body temperature as her fever subsided on Sunday.

“Her (Khaleda’s) breathing and saturation is very good. Her taste in food is the same as before. She told us she’s now feeling better," he added.

Zahid said the medical board will take a decision about her next course of treatment on completion of her 14th days of infection after conducting some tests.

He said the BNP chief urged all to pray for her speedy recovery.

Khaleda underwent the Covid test last week as eight other people at her residence were infected with the virus and her report came out positive.

Amid the coronavirus outbreak, the government freed Khaleda Zia from jail for six months through an executive order suspending her sentences on March 25 last year. Later, the government extended her release twice.