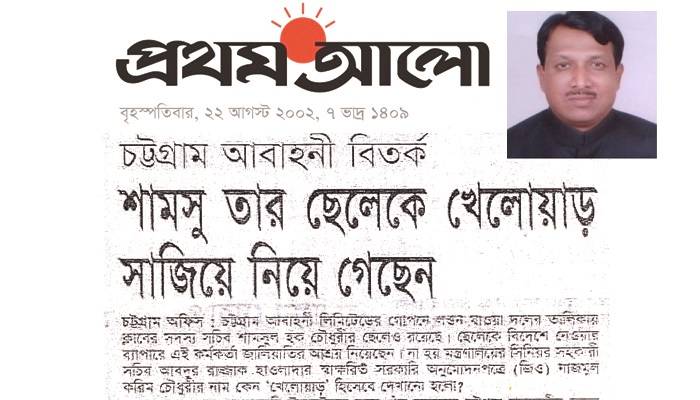 This was the first incident of human trafficking in the country’s soccer arena, said several officials involved with Chattogram Abahani wishing anonymity.

The traditional club formed a five-member investigation committee after the incident came to light but the current MP somehow managed to escape punishment.

A member of the club revealed that at least 11 individuals were trafficked in a 38-member squad of the football team that went to England to play an exhibition match against an academy side there.

“It was disgraceful for our club and what was more shameful is that he included his son Sharun in the squad though he was not involved in any football activities,” said a Chattogram Abahani official.

“His son was expected to study in England and so he needed an England visa in his passport and Shamsul Haque took this path for this sole reason,” he said.

Usually a coach, manager and two observers are eligible to travel with the team abroad but Shamsul sent 9-10 individuals terming them as observers.

A then official of Bangladesh Football Federation (BFF) said they were surprised to see that there were so many observers in the Chattogram side. “It was shocking to see such a number of observers in the team,” he said.

Many alleged that some of the members did not return home though Shamsul’s son came back with the team after going to England with a fake identity - a footballer without any footballing background.

Another official of the traditional port city club that was established in 1980 complained that Shamsul had literally turned the club into his own property while his son Sharun established absolute supremacy using muscle power.

“We were a force when we started our journey and now where do we stand in the sports fraternity of the country?” questioned a veteran organiser.

“For the last 19 years, no election of the club was held and he (Shamsul) is running the show as the general secretary by deploying his son and his gangs to protect his interests,” he added.

Although Shamsul is continuously playing the role of the general secretary, the post of president was changed in recent years, suggesting that the MP is working as the ‘permanent secretary’ of the club.

Asked how Shamsul and his son still manage to dictate the club that they have disgraced during this long course of time, one official said they do not have any other option. “We’ve always been vocal earlier but now that’s not possible as we love our own life and there’ll be no one to protect us,” he said.