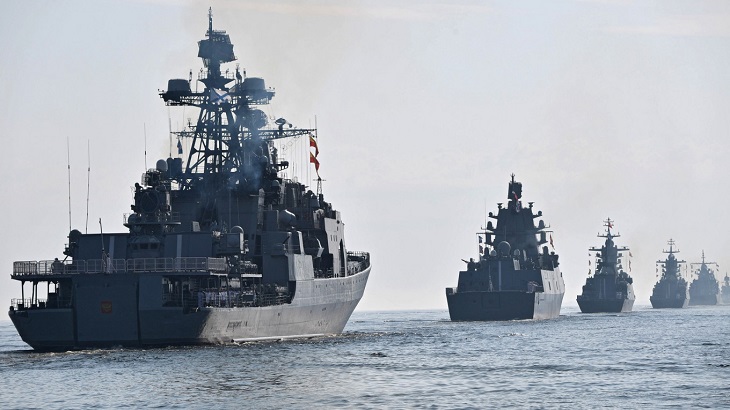 Russia on Tuesday stepped up military exercises in the Black Sea, as Washington branded Moscow's looming closure of key waters around Ukraine and Crimea an "unprovoked escalation".

The exercises come as tensions have soared between Moscow and the West over Russia massing troops on Ukraine's northern and eastern borders as well as on the Crimean peninsula it annexed in 2014.

The Russian defence ministry said in a statement that more than 20 Russian warships participated in joint exercises with air force fighter jets on Tuesday.

The ships included frigates, missile ships and anti-submarine vessels, and were accompanied by squadrons of fighter jets flying "at extremely low altitudes in difficult weather conditions."

The defence ministry also said that more than 50 fighter jets were moved to Crimea.

In a separate statement, it said that the Russian Black Sea Fleet had also conducted manoeuvres, which involved an anti-sabotage detachment and included "underwater combat training missions".

The exercises come after Russian news agencies citing the defence ministry reported last week that Moscow intends to close parts of the Black Sea to foreign military and official ships for six months.

Such a move could affect access to Ukrainian ports in the Sea of Azov, which is connected to the Black Sea through the Kerch Strait on Crimea's eastern tip.

The US State Department on Monday described the plan as an "unprovoked escalation in Moscow's ongoing campaign to undermine and destabilize Ukraine".

The European Union called it a "highly worrying development," while NATO also expressed "concern" and called on Russia to guarantee "free access" to Ukrainian ports.

Russia in recent weeks has deployed tens of thousands of troops to its borders with Ukraine and on Crimea, which defence minister Sergei Shoigu has said was for "training exercises" in response to "threatening" NATO actions.

Ukraine has been battling pro-Russian separatists in its east since 2014, in a conflict that erupted after Moscow annexed Crimea.