‘Himalayan Quad’: is China about to start its own security bloc with Nepal, Pakistan and Afghanistan? 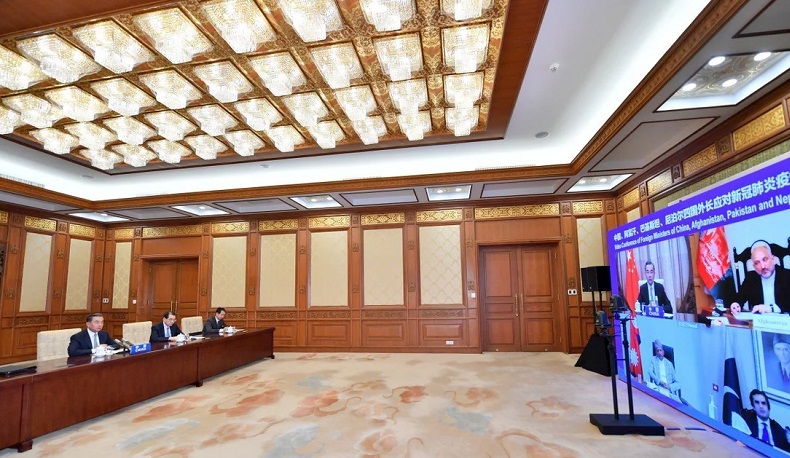 One of the most notable measures taken by Washington and its allies in response to China’s rise and the threat it poses to the liberal international order has been the development of the Quadrilateral Security Dialogue, or “Quad”.

China sees the grouping, which brings together Japan, India, Australia and the US, as part of the latter’s policy of encirclement – leading analysts to ask if Beijing might eventually seek to set up a rival bloc, focused not only on security, but other global challenges such as counterterrorism and climate change.

The Quad held its first ever summit-level meeting in March, when the four countries’ leaders pledged to deliver 1 billion doses of Covid-19 vaccine throughout the Indo-Pacific by the end of 2022 – widely seen as a counter to China’s vaccine diplomacy.

Beijing has responded by strengthening cooperation with Russia through “a flurry of military exercises and diplomacy”, according to the US-based Center for Strategic and International Studies’ article “The Return of the Quad: Will Russia and China Form Their Own Bloc?”, which was published last week and noted that the Chinese and Russian foreign ministers met in China’s southwestern Guangxi province following the Quad summit.

Russian Foreign Minister Sergey Lavrov has dismissed reports of a possible military alliance between the two, arguing during a visit to India last week that Moscow is interested in inclusive cooperation and sees such alliances as “counterproductive”. In early March, China’s defence ministry also said that Beijing has no plans to forge a military alliance with Moscow, adding that the two countries “adhere to the principle of non-alignment, non-confrontation and non-targeting of third countries”.

Earlier this month, Yury Yarmolinsky, an analyst with the Belarusian Institute for Strategic Research, wrote in an article published by India’s Observer Research Foundation that recent developments could in theory “push Beijing to institutionalise the Himalayan Quad project involving China, Nepal, Pakistan, and Afghanistan as a counterweight to the Quad.”

When contacted by This Week in Asia, Yarmolinsky said he had primarily relied on the views of Jagannath Panda, a research fellow and East Asia Centre coordinator at the Delhi-based Manohar Parrikar Institute for Defence Studies and Analyses, who used the term “Himalayan Quad” in a November article titled “The Trans-Himalayan ‘Quad,’ Beijing’s Territorialism, and India”.

Yarmolinsky, who is also a former Belarusian diplomat to India, said a Chinese Quad only exists in principle at present, but could become a reality if “certain red lines” – such as military interference in the South China Sea, support for Taiwan’s independence, and measures or statements that undermine the authority of the Chinese Communist Party – are crossed.

“As long as Canbera, New Delhi, Tokyo and Washington do not cross certain red lines … in the context of Beijing’s national interests, the theory will remain a theory,” he said.

Yarmolinsky said China already partners with Nepal, Pakistan and Afghanistan on security and strategic cooperation. For almost a decade, Beijing and Islamabad have been working on a US$62 billion connectivity and infrastructure project known as the China-Pakistan Economic Corridor – part of Beijing’s ambitious Belt and Road Initiative to grow a China-centred global trading network – and the two sides have also cooperated on tackling security challenges around their shared border.

Nepal, meanwhile, receives foreign direct investment and economic aid from Beijing, which has also opened a training academy in the small Himalayan country for the paramilitary police force that guards its border with Tibet. The two nations’ armies have held counterterrorism drills together in the past, too.

“Nepal is a strong foothold in the Himalayas in the context of the Sino-Indian territorial dispute,” Yarmolinsky said, adding that “Afghanistan is a significant factor in ensuring security and maintaining stability in Xinjiang [with which it shares a 76km-long border].”

China’s defence ministry said in 2018 that it was supporting and strengthening Afghanistan’s defence and counterterrorism efforts – with Beijing providing more than US$70 million in military aid to the Afghan government from 2016 to 2018, according to Afghan researchers.

Mark N. Katz, a government and politics professor at George Mason University in the US, described Pakistan as “willing and able to ally with China”, given Islamabad’s anti-US stance that has arisen from American military actions undertaken on Pakistani soil in the name of the “war on terror”.

“So long as India is at odds with both Pakistan and China, Islamabad and Beijing will have strong reasons to cooperate with each other,” Katz said, referencing the deadly flare-up at India and China’s shared border last year, and the long-standing feud between India and Pakistan, primarily over the disputed Kashmir region.

Panda, of the Manohar Parrikar Institute, said China has already tried to bring Nepal, Pakistan and Afghanistan together for a dialogue on the Covid-19 pandemic.

“China’s ‘Himalayan Quad’ is intended to balance out India’s outreach in the region,” he said. “As Beijing looks to expand its influence in South Asia, it will likely make more efforts to initiate a regular Himalayan Quad dialogue with these countries, with a long-term aim to institutionalise it.”

Though such a Chinese Quad remains a “remote possibility” at present – and is unlikely to ever match its US-led counterpart in terms of strength – Panda said that “considering the growing synergy between the Quad, the emergence of a Beijing-led alliance in the region is not out of the question.”

He said a China-led grouping could involve Russia, Pakistan, other states in Central Asia, Iran and even Turkey, noting, however, that any such alliance “would be staunchly China driven”.

While many of the countries listed above are friendly with China, their relatively weak economies, poor military capabilities and own sets of domestic problems and challenges would not necessarily make them good allies, analysts said.

As a small nation sandwiched between two giants, “Nepal will try to avoid making a firm choice of allying with one against the other”, George Mason University’s Katz said, though he did note that Kathmandu had been pushed closer to Beijing in recent years by Delhi’s “overbearing attitude”.

Though traditionally strong, India-Nepal ties have been strained in recent years by border disputes and an undeclared blockade Kathmandu accused Delhi of imposing in 2015, which brought the Himalayan nation to the verge of economic collapse.

Afghanistan, meanwhile, has a government that is “weak and unstable”, Katz said, and faced with a resurgent Taliban – the hardline Islamic movement that formerly governed the country before being removed from power by the US in 2001.

President Joe Biden has said he wants to withdraw all American troops, which have had a presence in Afghanistan since October 2001, before the 20th anniversary of the US invasion – raising the spectre of a return to Taliban rule.

“So unless China is prepared to massively support it after the US leaves, working with Kabul may only alienate the Taliban unnecessarily,” Katz said.

The politics professor said China might be willing to work with the Taliban, so long as it did not offer support to Uygur Islamists.

“Even if the Taliban say that they won’t support Uygur groups, the emotional desire to do so will prove too great for some, if not all,” Katz said, adding that China’s relations with the Taliban – whether it rules all or just parts of Afghanistan in future – “will be inherently difficult”.

Of all the possible partners China could ally itself with to form an alternative Quad, Russia is perhaps the strongest – yet despite sharing a “common American adversary”, Katz said many in Moscow view Beijing as more of a long-term challenge than the West.

“The real question is whether [Vladimir] Putin’s eventual successor will have the same or different threat perception than [he does],” he said. The Russian leader has said he is yet to decide whether he will run for president again when his fourth term in office comes to an end in 2024.

While China could create its own version of Quad, Bunn Nagara, a senior fellow at the Institute of Strategic and International Studies in Malaysia, said Beijing “can do much better for itself than that by improving its regional relations with far better conduct in the East and South China Seas”.

China has been accused in recent weeks of increased aggression in both waterways, with stepped up patrols in the East China Sea and Taiwan Strait, and hundreds of Chinese vessels spotted moored near a disputed reef within the Philippines’ exclusive economic zone last month.

Yarmolinsky from the Belarusian Institute for Strategic Research said that instead of forging tough alliances which are “relics of the past”, most countries including China might prefer “comfortable situational alliances with an economic basis”.

As examples, he pointed to Beijing’s participation and greater economic involvement in regional forums such as the Cooperation between China and Central and Eastern European Countries – also known as the “17+1” bloc – which is aimed at advancing trade and investment, and the Regional Comprehensive Economic Partnership that was signed by China and 14 other Asian countries last November, becoming the world’s largest free-trade agreement in the process.

Yarmolinsky further noted China’s involvement in the Shanghai Cooperation Organisation with Russia, Kazakhstan, Kyrgyzstan, Tajikistan, Uzbekistan, India and Pakistan, and its cordial relations with other members of the BRICS grouping such as Brazil and South Africa.

“The more allies there are, the more stable one or another regional security architecture is,” he said.