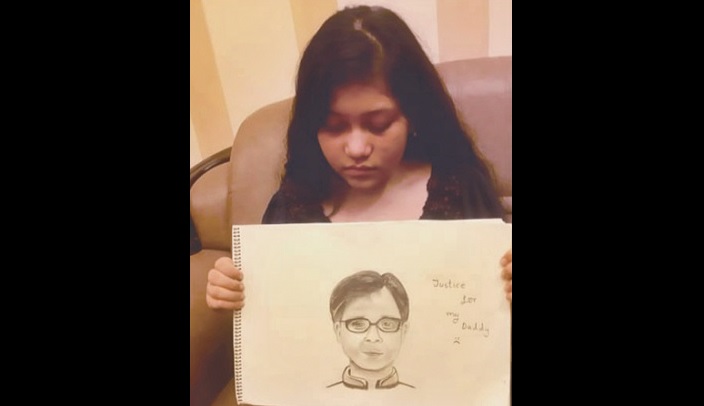 The famous song “Ay khuku ay” by Hemanta Mukhopadhyay perfectly reflects the deep love and affection of a father towards his daughter.

A daughter feels secured and finds confidence when she stays around her father. She depends on him in every step of her life and she considers him to be an idol.

The relation between a father and a daughter is pure and selfless. Anger and affections are found simultaneously in this relation.

There is hardly any daughter who does not nurture love in her heart for her father. Every father is like a child to his daughter. Daughter loves father and yells at her father as well.

Daughter takes care of her father and slams him as well. All fathers are the best fathers to their daughters. A father finds happiness in the smiling face of his daughter.

Such a loving relationship had developed between Chattogram’s young bank official Abdul Morshed Chowdhury and his daughter Mubasshira Jahan Chowdhury, a sixth grader of a local school.

Mubasshira’s father never spoke to her in high tone. If Mubasshira got poor marks in any school exam, her mother used to scold her, but her father did not tell her anything. Rather he used to bring gifts for her.

Morshed often paid his daughter’s school fees in advance for the whole year.

But forgetting his baby girl, he hanged himself!

What amount of mental stress had made him compelled to commit suicide!

Since the April 7 incident, Mubasshira was completely silent as she could not accept that her father would never return and love her again.

She sought justice from Prime Minister Sheikh Hasina for the forced suicide of her father.

In the last 20 days of her father’s life, she was with him as her mother Ishrat Jahan Chowdhury kept her isolated after being infected with Covid-19.

The innocent girl is watching how the people who are accused of torturing his father and inciting him to commit suicide are roaming freely even after a case was filed against them.

Besides, the accused are threatening the plaintiff.

Mubasshira’s luckless mother and banker Morshed’s wife Ishrat Jahan Chowdhury said, “The administration has been informed of the whereabouts of the accused. But we are not watching any step from them to arrest the culprits.”

In such a heart-rending situation, Mubasshira has expressed her anger and frustration through her artwork.

She had spent 40 minutes to depict her father on her canvas. While drawing his beloved father, she walked down the memory lane and told her mother that her “father often told me that you paint so many things but never drew my portrait”.

Remembering the wonderful memory created by her deceased father, she continues to paint her father. Tears roll down the chick of her grief-stricken mother.

Painting her father’s portrait, Mubasshira she wrote “Justice for my Daddy”.

She wants to seek the attention of the Prime Minister who also lost her father untimely to mete out punishment to the culprits.