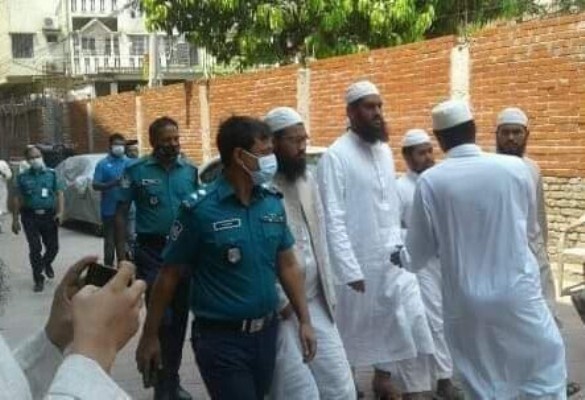 Hefazat-e-Islam Joint Secretary General Mamunul Haque has been arrested from Mohammadpur Qawmi Madrasah in the capital.

Detective Branch (DB) of Police arrested from the first floor of the Jamia Rahmania Madrasah Sunday afternoon.  He was surrounded by around 150 teachers and students who tried to resist the arrest.

Mamunul is instigator of attack on a Hindu village and vandalism in Chattogram, Brahmanbaria and some other places of the country.

He was caught red handed with a woman while staying at a Sonargaon resort. They were under police custody. Later, Hefazat leaders and cadres attacked the resort and snatched him away. So, he is facing several criminal cases.

After arrest, police took him to Tejgaon police station for interrogation and other formalities. He will be taken to DB office.

Deputy Commissioner of DMP Mohammad Harun-Ur-Rashid at a press conference said Mamunul Haque has been arrested in a case filed with Mohammadpur PS in connection with Hefazat atrocities in Dhaka in 2013.

Hefazat Joint Secretary General Mamunul Haque is facing nearly 90 cases including ones for vandalism in Sonargaon resort and other places.

Police said hemay be shown arrested in several cases and be produced before the court tomorrow (Monday.)