Myanmar’s protesters face down the military with slingshots and rocks 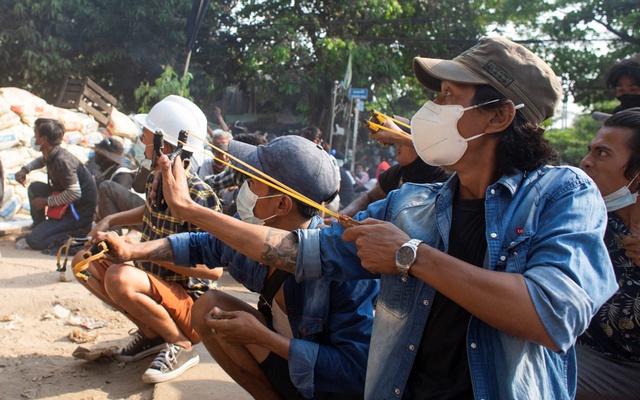 Every day, when Ko Win Kyaw goes out to demonstrate against the Myanmar military, he carries his slingshot and a supply of rocks as ammunition. It is little help against the army’s overwhelming firepower, but he said it gives him confidence and a way to strike back.

“I know I can’t defend myself with a slingshot, because I’m facing people with guns,” he said. “When they shoot, I run.”

Win Kyaw, 36, is one of many pro-democracy protesters who have started arming themselves with rudimentary weapons as they defy the military regime in Myanmar. What began as peaceful protests after the Feb 1 coup rapidly grew into a resistance movement, with citizens defending themselves using slingshots, homemade air guns, old hunting rifles and firebombs.

In a statement this past week, the United Nations High Commissioner for human rights, Michelle Bachelet, said the military’s brutal crackdown in the Southeast Asian nation had “led to some individuals taking up arms,” warning that the situation had “echoes of Syria in 2011” and was “heading toward a full-blown conflict.”

For many in Myanmar, the turning point came March 27, when security forces killed at least 150 people. It was the deadliest crackdown since the coup, according to a human rights group tracking the killings. More than 728 people have been killed, and at least 3,000 have been detained.

In the hard-hit Tharketa township of Yangon, Myanmar’s largest city, one protester said he and his friends had formed a team of about 20 people after the slaughter March 27. “We were peaceful protesters after the coup,” said Ko Thi Ha, 26. “But when they killed so many people, we couldn’t go further with a peaceful movement. We needed to fight back.”

The protesters often turn to YouTube to learn to make simple weapons, relying on easy-to-find resources. For air guns, plastic pipe is used for the barrel, and a butane lighter switch works as a trigger. Ball bearings taken from bicycle wheels are the most popular ammunition, but protesters also shoot marbles and plastic pellets. Homemade smoke bombs are usually made with gunpowder or potassium nitrate, an ingredient in fertilizer.

Both the air guns and the smoke bombs are more defensive than offensive. The air gun is not lethal, but it can hit a target 100 feet away. The protesters use it to keep soldiers from advancing too quickly. When the protesters need to escape, they use the smoke bombs to shield themselves from view as they retreat in hard hats and goggles.

Along with the improvised weaponry have come code words to describe the various maneuvers used on the front lines. “Cooking up biryani,” a popular rice dish, means to make weapons. “Giving biryani to guests” is to shoot the weapons at soldiers. “Big biryani” is an arson attack.

This month in Kalay, a town about 150 miles northwest of Yangon, one team put its air guns and single-shot hunting rifles to use when the military led an attack. Calling themselves the Kalay Civil Army, the resistance fighters set up barricades made of sandbags on the edge of town and prepared their makeshift weapons.

When soldiers arrived at dawn and ordered the town to dismantle the barricades, the Kalay Civil Army refused. The soldiers returned at 10 am and opened fire with machine guns and rocket-propelled grenades. At least 11 townspeople were killed, and 18 were arrested. Before carting off their prisoners, the soldiers lined them up for a grim group photograph with the seized weapons.

The defeat of the Kalay Civil Army sent a clear message from the military that those taking up arms and organizing such tactics would be crushed. About a month before the Kalay Civil Army got organised, a group of elected leaders who formed an alternative government-in-hiding declared that people have the legal right to defend themselves against the Tatmadaw, as Myanmar’s military is known. Fighting the junta, the officials said, is not a crime.

In addition to Kalay, the military has targeted other pockets of resistance where residents have armed themselves with rudimentary weapons. In the town of Bago this month, security forces attacked a similar group with rocket-propelled grenades and machine guns, killing at least 82.

State-owned news outlets have blamed the ousted elected leaders and “anarchic mobs” for the rising violence in Myanmar. In other countries where pro-democracy movements have taken hold in recent years, authorities have also justified intensifying crackdowns by pointing to protesters with weapons.

In Yangon this month, there were several arson attacks on police stations and government offices as well as small explosions that caused little damage and no injuries. Some experts on the Tatmadaw fear strong retaliation if protesters were to succeed in procuring deadly weapons on a large scale.

Anthony Davis, a Bangkok-based analyst who writes for the Jane’s Group of military publications, said the generals viewed themselves as having acted with restraint, responding proportionately as the protests have grown.

“People talk about the brutality of the Tatmadaw, which is undeniable,” he said. “But we are talking about 500 dead in the space of two months, not 5,000. It could easily have been more. By their own twisted standards, there is no doubt they are trying to calibrate the escalation of violence.”

Of the protesters’ homemade weapons, the deadliest is the firebomb.

“Once you see firearms and grenades on the side of the protesters, the Tatmadaw’s gloves will come off,” Davis added. “At that point, they will not hesitate to blow houses down. The Tatmadaw will react viciously and immediately.”

While the army is equipped with rocket-propelled grenades, machine guns and Chinese-made surveillance drones, the slingshot has become the weapon of choice for many protesters. They are cheap and easy to conceal and can be fired quickly from hiding. For ammunition, some buy glass marbles or smooth stones that have been collected for the purpose. When ammunition runs short, there are usually plenty of rocks around.

Until recently, the slingshot was most common in rural areas, where cowboys often use it to prod their cattle. A skilled marksman can pick off a mango from a high branch.

After the protests began, the slingshot first appeared in the hands of the police. Videos taken by residents showed groups of officers roaming the streets at night, firing randomly at people, homes and windows. As the demonstrations escalated, the police traded their slingshots for rifles while the protesters took them up in large numbers.

Last month, when Alexander Fomin, the Russian deputy defense minister, visited Myanmar, the junta leader, Sr Gen Min Aung Hlaing, showed him an exhibit of items confiscated from protesters. A video of the encounter shows the general demonstrating for Fomin how a slingshot works.

“Pull back to shoot,” he said.